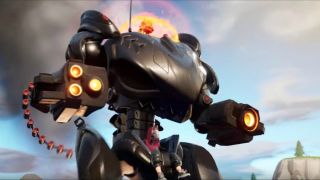 Fortnite's unpopular mechs might be heading to the scrap pile. The beefy war machines were introduced to the game with Season 10, but they've not been warmly received, even after they were nerfed. Epic has stood by their walking tanks up until now, but that might be changing with the season's imminent end.

Since yesterday's 10.40 update, the mechs have been having some catastrophic problems. When they're summoned, they immediately explode, tragically leaving the island mech-free.

While Epic's not saying anything, it looks like the Visitor is responsible. Judging from the screens in his Dusty Depot lab, they've been infected with a virus. The scoundrel!

This is all part of the build-up to the season's conclusion, then, rather than Epic simply getting rid of the mechs. Maybe players will be able to save them—I doubt there will be many takers—but this seems like a pretty good time to toss them in the vault.

We're expecting Fortnite Season 11 to kick off early next month.