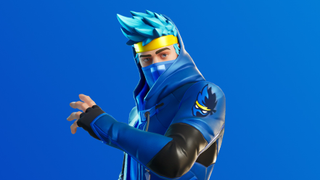 It was inevitable. There's an official Fortnite Ninja skin now. Ninja, the blue-haired king of streaming whose name is practically synonymous with Fortnite, finally has a little piece of himself in-game. Well, all of himself from the looks of it. Ninja debuted his first official skin on Twitter on Wednesday, and soon you'll be able to play as the man himself.

"I've dreamt of having a skin in Fortnite since I started playing the game," Ninja tweeted out Wednesday morning. "Today, my dream becomes reality."

To see all the looks that come with the skin, scroll down.

How to get the Ninja Fortnite skin

According to Ninja's tweet on the matter, his official skin will be available as part of the new Fortnite Icon Series. To get the skin, you'll need to log into the Epic Game Store (that's Ninja's wording, although we have to assume it'll be in the Fortnite item shop, right?) between the hours of 6 p.m. and 7 p.m. central standard time on Thursday January 16. Ninja said on stream that the skin will be available from then until some time on January 19th.

Oddly, there's no confirmation of how many V-Bucks Ninja's skin and items will cost. Considering this is a full set of gear, we're going to guess this will run you at least 1,500 V-Bucks, possibly up to 2,000, based on past special skins.

Ninja isn't the only one getting some special gear made in their image in Fortnite. According to Epic's blog post, more collaborations are on the way, including for streamers like "Loserfruit" and "TheGrefG."

Here's a look at what appears to be a style of the skin without the face mask, showing off Ninja's conventionally handsome mug.

There's two other styles that sort of shroud Ninja's eyes, with or without a hood, which I assume is meant to look like his brand's logo.

You can check out Ninja's live reaction to seeing his official Fortnite skins for the first time in the video below.

That's not all. Besides the skins, Ninja is also getting his own dual katanas pickaxe, Ninja's edge back bling, and a Ninja style emote.

Looking for more Fortnite? You can check out our Fortnite hub page for every story and guide we publish, like the latest 11.40 update notes, how to deal with aimbot cheaters, our favorite Fortnite creative codes, and everything we know about Fortnite Chapter 2 Season 2.