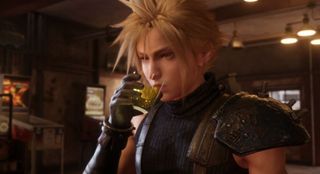 Final Fantasy 7 Remake is a PS4 exclusive, but only until 2021. While Square Enix hasn't announced a PC port, it seems increasingly likely, and now details plucked from a leaked PS4 demo have provided more hints that we'll be replaying Cloud and company's adventure on PC in the future.

Presumably in preparation for an imminent public release on PSN, a demo for Final Fantasy 7 Remake was added to the platform and snatched up by people with hacked PS4s. Since then, they've been digging through the demo's files and posting datamined screenshots, which is where the PC hints were uncovered.

On Twitter, roXyPS3 (cheers, Reddit) said they'd spotted a few things that suggested a PC port was in development, including code that mentioned higher resolutions (on PS4 it appears to be 1080p running at 30 fps) and both Nvidia and AMD. They also posted screencaps of files containing weapons, spells, audio, mini-games and more.

Square Enix hasn't confirmed the existence of the demo, so it's not clear exactly when PS4 owners will be able to take it for a spin, though it will likely be soon. Hopefully the leak hasn't caused any delays. If you're waiting for the PC port, however, you won't be playing earlier than March 4, 2021.