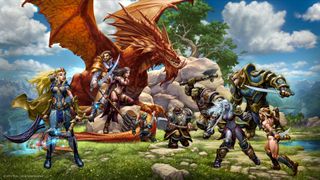 The big problem with most MMOs is that they're static: Wait your turn, clobber the bad guy, report in, wash, rinse, and repeat. Go back a month later and the same quest-giver will still be there, offering the same reward for the same beat-down. That's obviously a generalization, but it's not inaccurate; it's also something that Sony Online Entertainment is trying to get away from with Everquest Next.

"In EQ Next, you won't walk into an area and see a group of NPCs standing around with question marks over their heads," Lead Content Designer Steve Danuser explains in the new video. "Instead, you'll be guided to areas where events are taking place." These events are happening "all the time, all over Norrath," and players will have the ability to influence them in different ways.

The system is built around NPCs who lead virtual lives based on attributes assigned to them by the developers, and NPC groups who will pursue their own goals, which can have a far-reaching impact on other aspects of the game world. Using an internal design tool, Danuser and Storybricks Lead Designer Stephan Bura demonstrated the system in action by showing how a Kobold incursion into the Serpentspine Mountains could ultimately lead to the awakening of destructive evil spirits, depending on the choices players make.

"Player actions can trigger rallying calls, which are gigantic, world-changing events," Danuser says. "The bloody Kithicor rallying call brings players together from across the server, and will leave Kithicor permanently changed. Players on other servers might have made different choices, and could see dramatically different consequences."

One enthusiastic developer video isn't enough to completely convince me, but it certainly sounds promising. If SOE can pull this off, Everquest Next might actually be the MMO that finally earns my sword. A shorter version of the above video, for those who don't have 30 minutes to dedicate to the whole show, can be found here.