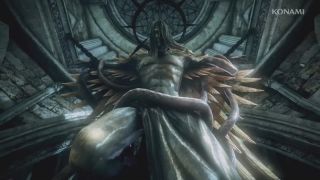 Dracula's still angry. A new Castlevania: Lords of Shadow 2 trailer puts his rage on display and hints at a few of the likely showdowns set to take place in the sequel's mashup of a modern city and an ancient Gothic castle. This being Dracula, the new footage certainly deals with blood, but it's the blood that binds family that's the issue here, as we see what's become of Gabriel Belmont's son Alucard.

Given that Konami and MercurySteam have been pitching Lords of Shadow 2 as a more open experience than the first game, the brief glimpses we get at some of the story's settings in the video look appropriately gorgeous and sinister. What's even more chilling is the introduction of its strange and tragic cast of characters, again pointing to a collision between the modern world and a bizarre, dark history.

After getting a nice introduction back in August to the game's blood-based magic and melee systems, the new footage adds an appropriate amount of narrative heft that leaves me, well, intrigued. We're told anger isn't healthy but this trailer makes me want to dive right in. Castlevania: Lords of Shadow 2 releases February 28.