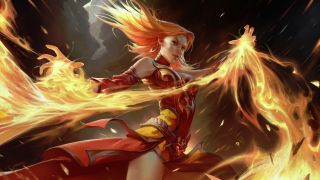 The Dota 2 International begins in earnest on Wednesday, when the sixteen best teams in the world go to war in the group stages in the hopes of securing an advantageous start in next week's main event. Before then, however, we have tomorrow's wildcard bracket. Four teams will fight for two remaining spots in the International in a brutal double-elimination format with everything on the line.

I mean everything. The International's massive prize pool—in excess of $19.2m and climbing at the time of writing—is split between all sixteen finalists. Even the bottom-place finishers will walk away with close to $100,000. Not only are tomorrow's wildcard competitors fighting for the right to join the International proper, then, but for a prize in excess of the total pool of many smaller events.

The stakes are absurdly high. These four teams—Escape Gaming, compLexity, Execration and EHOME—all placed third in their respective regional qualifiers. This earned them one last shot at a place among the very best in their sport. Tomorrow, we'll learn which teams made the trip to Seattle in vain.

The games will be placed on US west coast time tomorrow. Valve don't yet list a time on the official schedule, but expect play to start around 10:00 PST (19:00 CEST).

You'll be able to watch the games on Twitch as well as via Valve's on proprietary Dota streaming service, DotaTV. You can also watch in the game client itself, which allows you full choice of commentary team as well as the ability to control the camera yourself if you prefer. For the first time, Valve are also offering VR spectating through the Dota VR Hub.
If you miss any games, check out the replay section of the official site.

compLexity put themselves on the map in 2015 with a better-than-expected performance at last year's International. Since then they've undergone a roster shift, losing MoonMeander and Fly to OG and bringing in three Swedes: Chessie, Limmp and Handsken. The new coL is a team that has proved itself capable of taking games off the very best, but is yet to place above the mid-table at a top-tier event. The team is also notable for including two sets of brothers in its roster in Chessie/Limmp and swindlemelonzz/Zfreek.

Their track record suggests that they've got a good chance of making it through the wildcard. compLexity are taking the International seriously and have brought in coaches and analysts to help them prepare. This could be the beginning of another underdog run, but they'll need to show something new if they want to escape the mid-table at the most competitive event of the year.

This isn't necessarily a name you'd expect to see in the wildcard. EHOME is one of the grand old houses of Chinese Dota, placing high at last year's International and performing well right up until the Shanghai Major, where their star fell a little. After a reshuffle, the new EHOME boasts a lot of talent, including longstanding Dota veterans like iceiceice and LanM. These are players more used to getting invited to the International than fighting their way in the long way.

As such, it'll be an upset if they don't qualify for the main event—and if they do, they’ve probably got the best shot out of any team in the wildcard at causing an upset in the group stages. That’s not to say that they’re a safe bet, by any means: their recent form has been hit and miss, hence why they’re playing in the wildcard at all. But if you’re assembling your fantasy draft in time for tomorrow’s games, you could do worse than to slot in a couple of EHOME players.

Formerly No Diggity, there's a lot of veteran European Dota talent in Escape Gaming—including player-turned-caster-turned-player SyndereN, who last attended the International as a player in 2013. He's joined by former Fnatic/NiP carry Era and nomadic midlaner qojqva, returning to pro Dota after a break. That wealth of experience isn't evenly distributed, however: YapzOr and KheZu are both relative newcomers.

Escape have a mixed recent track record and the wildcard is likely to be a real test. But their performance against the top tier isn't what matters, at least in the short term: what matters is how they shape up against the other wildcard teams. In that regard, they have a shot at making the cut—most odds favour them over Execration. Much depends on how they match up against compLexity, however, which makes their first game of the event one to watch.

This is a team that hasn't competed much, or won, outside of South East Asia. Recent form suggests that they can be competitive with the other top SEA teams, but their performance is very variable. That, coupled with a lack of experience at events of this scale, means that Execration are the underdogs coming into the International wildcard.

That's no reason to count them out, however. Abed is the youngest player in the tournament at 15 and supremely talented—the second highest-ranking player in SEA. Execration have the ability to perform at a high level, it's just a matter of whether they can bring that talent to bear when it counts. It's also worth remembering that the wildcard is a dangerous bracket and upsets can and do happen when the stakes are this high. For these teams, it all comes down to a handful of matches. With the right players and the right strategy, Execration certainly have a shot.

We’ll be running more guides to the International, its competitors and metagame as the week progresses. You can find it all on PC Gamer Pro.