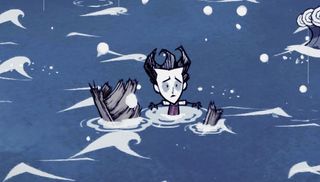 Shipwrecked, the Don't Starve expansion that traps poor Wilson (or whichever of the other oddball characters you prefer) on a tropical archipelago, hit Steam Early Access on December 1 and has earned an “overwhelmingly positive” response from nearly 1400 players. There's still quite a bit more content to come, though, and so yesterday developer Klei Entertainment revealed its “roadmap” for the next couple of months.

There are three more characters to be added to the game, and three new big-assed bosses, including the Tiger Shark. A new biome will also be added, and there are also plans for more “Shipwrecked-specific set pieces and world items.” But the most impactful changes may may be made through behind-the-scenes balance changes, which will be made over the course of the coming updates.

“This game takes a long time to play, and you will encounter different scenarios each time you play. Players constantly encounter situations that we never even imagined. Because of this, when we add new content to Don’t Starve the initial tuning is, for the most part, our best guess on what will play well,” Klei's Bryce Doig explained. “Your feedback on these new systems is worth its weight in gold (how much does text on the internet weigh?) when we adjust the tuning of systems as it allows us to make much more informed decisions than we would otherwise be able to make.”

The plan is to add new content through updates released every three weeks, beginning with the next one in mid-January and concluding at the end of February. “After that there will be an update dedicated entirely to bug fixes and balance changes,” Klei said. “Of course, it should be noted that all of these times are just estimates of our schedule and may very well change.” We'll have some impressions of Shipwrecked on the site next week.