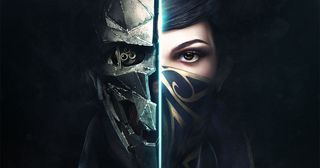 Slick murder sim Dishonored is getting the tabletop RPG treatment from Modiphius Entertainment, the creators of Star Trek Adventures and the upcoming Fallout wargame. It's not far off. You'll be able to roll a character and hit the streets of Dunwall this summer.

As well as being one of the best stealth games on PC, Dishonored is blessed with one of gaming's most fascinating worlds, where the industrial revolution was fuelled by whale oil and swarms of ravenous rats plague the streets and munch on humans. It's gloomy, magical and full of murder—not a bad setting for an RPG.

The Dishonored Roleplaying Game will let you make your very own assassin, but unlike its digital counterparts you'll also be able to explore other careers, forgoing slinking in the shadows for becoming an explorer or working for royalty. Void powers are returning, as well the series' Chaos mechanics, which have been bundled into a new 'Momentum' system.

As for what's driving the game, Modiphius uses its own 2d20 system, which I haven't used but apparently is a bit more action-focused. The tabletop developer has also worked with Arkane's Harvey Smith, as well as writers and artists who helped bring the digital games to life.

The tabletop RPG will launch this summer with a 300-page book that will introduce the Empire of the Isles and the Void, walk you through how to make a character, provide story hooks and get you started with a four-act campaign set in Dunwall. In the meantime, you can sign up for updates on the official site.