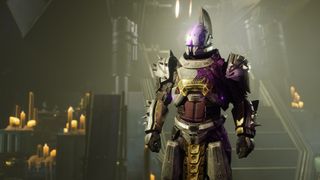 How does Destiny 2's new Empyrean Foundation community event work? Well, it's sort of like a giant interplanetary ponzi scheme, except everyone gets paid in god roll guns. And the best part is that it's incredibly easy to obtain the weapons you want, provided you understand how the  system works. Which is what I'm here to help with.

How to unlock the Destiny 2 Empyrean Foundation

Before you can get cracking, you’ll first need to unlock the Empyrean Foundation.

The initial step is fairly simple, all you need to do is visit Saint-14 in the Tower. After that you’ll need to complete a run of the Destiny 2 Sundial with Inotam as the final boss. Then you need to pick up 30 orbs of light—which is fairly easy with a full fireteam. Using masterworked weapons will help generate additional orbs, and having Wendigo equipped will even let you pick them up once your super is full. Just head to a lost sector or the Tribute Hall and start getting multikills. Once that's done, return to the Tower and insert the Empyrean Core into the Tower Obelisk.

This initiative lets you contribute towards a massive community pot that eventually unlocks... something. Datamined information suggests that it could pave the way for a Trials of Osiris return, but whatever it is, it’s locked behind an icon in the Crucible Destination tab for now.

At time of writing, the community has reached staged three of seven, having amassed over 700 million Fractaline. Only the next resource target is known (in this case 1.2 billion Fractaline) but future goals will only be known when the community gets there. Live progress is shown on the Tower Obelisk.

To optimise the grind, pick up four Timelost Bounties and complete them by donating 400 Polarized Fractaline. For each 440 you’ll be able to get four of your chosen weapon. Although if experience is your aim, you can actually pick up seven Perfect Paradox Timelost Bounties. While this is dearer (but still only 30 Polarized Fractaline) you can get much more experience as a reward.

Note that if you're more interested in contributing to the community effort than grinding out weapon frames, then the most efficient way to donate your fractaline is to level up your planetary obelisks first. That's because each level you increase an obelisk by will add to the 'resonance' of the Tower obelisk. The reason you want to do that is that with each weekly reset, you'll receive back an amount of fractaline equal to the resonance of the Tower obelisk.

So in order to donate entirely optimally you should level up your obelisks as much as possible in the first two weeks, then collect the returned fractaline just before reset and dump it all back into the obelisks. Then for the remaining three weeks of the event, just go ham donating everything before reset. Honestly though, do it however you want. The total goal might be in the billions, but you can bet on the Destiny 2 community getting it done, so feel free to just focus on chasing weapon rolls. Speaking of which...

Aim for these god rolls

The following list should give you an idea of the best rolls of each available weapon. While rolls can be influenced and min-maxed with specific barrels, mags, and masterworks, it’s more important to aim for perk rolls: these will be the major influences on the viability of the weapon, whereas the aforementioned are incremental bonuses with a smaller impact overall.