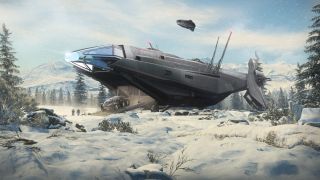 Crytek and Cloud Imperium Games have been preparing for a legal battle over Star Citizen since late 2017, with Crytek contending that the developer breached a license agreement and committed copyright infringement, but the lawsuit could soon be dismissed at Crytek's request.

Crytek's case hinges on Squadron 42, the standalone singleplayer campaign, being released, but according to court documents (posted on Reddit by RiSC1911), that won't happen in time for the trial.

"Crytek based its primary claims in this case on multiple public statements by CIG indicating the release of Squadron 42 as a standalone game with a release set for the first half of 2020," the memorandum reads.

According to the motion, based on what it's learned during discovery, where the two companies have to share information, Crytek wants to voluntarily dismiss the lawsuit, "with the intention of refiling the suit against CIG following the release of Squadron 42".

In late November, Crytek was told that CIG had not decided how the game would be released, though the actual response has been redacted. The question, however, provides some helpful context. Crytek asked CIG to state if Squadron 42 was being released as a standalone game, something the developer has previously confirmed. But it now looks like, at least in late 2018, it still hadn't locked that down.

Crytek claims that the redacted response "came as a surprise" and, ominously, that it will also be a surprise for the people who pre-paid for Squadron 42. It also claims that there have been other cases of CIG's public statements not being consistent with what it's said during litigation.

"This case has been marked by a pattern of CIG saying one thing in its public statements and another in this litigation. For example, at the outset of this case, CIG had publicly claimed it had switched to using the Lumberyard Engine for both Star Citizen and Squadron 42, but was forced to confirm during this litigation that no such switch had taken place."

The status of Squadron 42 is currently up in the air and it's already been pushed back several times. In August 2019, the Squadron 42 beta launch, which had originally been planned for this summer, was delayed by 12 weeks, but since then the date target has become more broad, with Chris Roberts saying the second half of 2020.

The trial was initially planned for June, which would be before Squadron 42's release, so both parties have agreed to push it back to October 13. Crytek still wants the lawsuit to be dismissed, however, suggesting that it doesn't expect the game to be out by then.