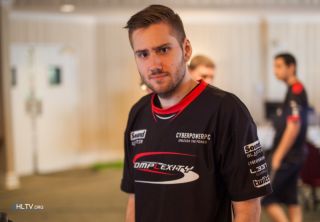 CompLexity Gaming has announced that it is returning to the CS:GO scene with a new team, "The Syndicate," whose roster includes Kory "Semphis" Friesen, one of the players on the compLexity CS:GO roster that was acquired last year by Cloud9.

"We couldn’t be happier to be back in CS:GO,” CompLexity Gaming founder and CEO Jason Lake said. “Our love for the franchise is what lead to compLexity’s formation and we’re humbled and honored to be a part of the game once again. We’re also very excited to announce our new roster and eager to tackle the challenges ahead. Everyone involved understands that the division will be a work in progress, but developing talent and building champions are areas in which we excel."

The new compLexity CS:GO roster is:

The original compLexity CS:GO team was acquired by Cloud9 on August 1 of last year. According to a Daily Dot report, the players were "disgruntled" by management policies, which among other things excluded them from any revenues earned through in-game sales of compLexity CS:GO stickers at that year's ESL One Katowice event. But bygones appear to be bygones.

"We cannot properly express our excitement for this opportunity to represent compLexity," Chowdhury said. "Shoutout to Jason Lake and Jason Bass for believing in us and making it possible for us to live out our passion. I speak for everybody on the team when I say it’s good to be home.”

Friesen, as a former Cloud9 player and the only member of last year's CS:GO roster to return to compLexity, is probably the most prominent member of the new lineup. But these days he may be better known for his claim that he and other members of Cloud9 were on Adderall while competing at ESL One Katowice earlier this year. That admission prompted ESL to institute new regulations on the use of PEDs and other substances at its events, which will include random testing of competitors. (And maybe, when compLexity returns to action, some not-so-random testing, too.)

An HLTV report says the new compLexity lineup will make its debut later today when it takes on Team Liquid in CEVO Professional.

Each new journey starts with a first step. This is that step. Hard work and perseverance will dictate the path, as it did in 2003. #coLcsAugust 24, 2015