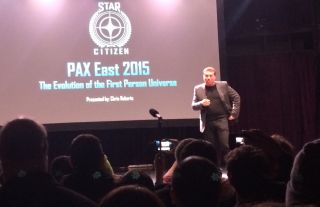 Last night, Cloud Imperium Games founder Chris Roberts addressed Star Citizen backers at an event near PAX East 2015 in Boston. We saw new damage modeling tech, an updated first-person shooter module, and a zero-G combat sport that's clearly inspired by the Ender's Game battle room. The crowd cheered for glamour shots of an Aegis Retaliator, and whispered excitedly after every demonstration. You can see a couple of the videos that were shown here, and Cloud Imperium should be posting the rest soon.

After the presentation I joined Roberts in the venue's green room to find out more about Star Citizen's gun-related ambitions, the persistent universe, and how he feels about skeptics and accusations. Watch that in the video above.

Oh, and here's 'Electronic Access,' which we talk about at the start—it's a bit of in-game fiction that puts 'EA' in the shoes of a certain other game developer, which exists in the Star Citizen universe as 'Original Systems.'

Keep an eye out for our ASUS ROG G751 laptop giveaway after PAX East—we're collecting signatures from everyone we interview for a one-of-a-kind prize.