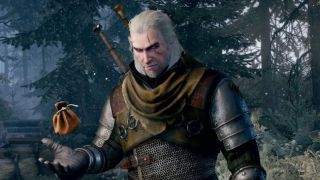 The Witcher has been a pretty big deal in Poland for a long time, but it was virtually unknown to Western audiences prior to 2007, when CD Projekt released the first game in its groundbreaking RPG trilogy. It came to light much later that Witcher creator Andrzej Sapkowski had licensed the property for an up-front sum instead of a percentage deal, because he thought videogames were stupid and it wasn't going add up to anything anyway.

But it did—it really did—and in 2018, Sapskowski issued a demand for more money, to the tune of 60 million PLN, which works out to $15.6 million. CD Projekt said no, but it also said that it would work toward reaching an "amicable resolution" of the matter. In February 2019 it was reported that "reconciliation" between the two parties was in the works, and now it appears that the goal has been reached: The company announced today that Sapkowski and CD Projekt have "signed an agreement further solidifying their relationship."

Details of the new arrangement are buried under an NDA, but CD Projekt said that deal "satisfies and fully clarifies the needs and expectations of both parties, past and present, and sets out a framework for the future cooperation between the two sides," which has to be encouraging for fans eager for more Witcher games. It also "grants CD Projekt new rights" with regard to the property, although those also are not spelled out, and confirms its right to use the The Witcher in "videogames, graphic novels, board games, and merchandise."

Money is clearly the fix here, but it will be interesting to see if the new deal also takes steps toward resolving Sapkowski's other complaint: That despite the popularity of The Witcher, he's virtually unknown in most of the world as its creator. He's sure not wrong about that. Even Henry Cavill, star of The Witcher on Netflix, recently admitted that he knew nothing about the books (or, presumably, Sapkowski) until years after he'd played The Witcher 3.