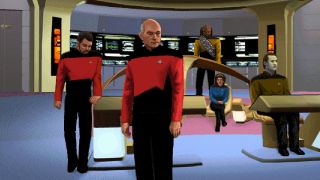 Today we've been blessed with a new Star Trek series based on The Next Generation. Called simply Picard, the show brings one of the greatest TV characters of all time back to the small screen, and it's actually really good—nostalgic and familiar, but also fresh and exciting.

Jean-Luc Picard has also appeared in a bunch of Star Trek spin-off games, including a few you've probably forgotten all about...

Star Trek: The Next Generation – A Final Unity

This adventure game mixes classic point-and-click puzzling with space exploration, tactical combat, and a bit of Trek-style diplomacy. You can explore the Enterprise-D, go on away missions, and talk to the crew—many of whom are voiced by the cast from the TV show, including Patrick Stewart.

Released alongside the movie of the same name, Generations is a curious blend of 3D first-person shooting and tactical ship combat. There are even some adventure game-style puzzles in there. Unfortunately, it's fairly boring—but the concept of Picard chasing bad guy Soran across the galaxy is kinda interesting.

This is one of many Star Trek-based real-time strategy games released in the 2000s. It incorporates plot elements from Deep Space Nine, The Next Generation, and Insurrection, and fits the standard RTS mould: pick a faction, harvest resources, build a base, construct a fleet, then wipe out the enemy.

Yes, it's another tactical space combat game. Set six months after the events of the first Armada, this sequel sees the return of the Borg, and Picard using a transwarp gate to take the fight to their staging grounds in the Delta Quadrant. A solid sci-fi RTS, but overshadowed by games like Homeworld.

This is one of three Starfleet Command games, which are loosely based on the tabletop game Star Fleet Battles. However, this was the only one to star Picard. In it you play as various characters including a Klingon captain, a newly-minted Romulan captain, and a Federation captain working under Picard.

Now we're talking. This remains one of the best Star Trek games on PC, letting you sit in the captain's chair and command your own Federation starship. You can give orders to your crew, or control the ship yourself, and a Stewart-voiced Picard teaches you the basics of the job. I can't think of a better teacher.

This first-person shooter is a kinda sequel to Star Trek: Nemesis—a film the new Picard series has close ties to. You play as a member of the Hazard Team, an elite Starfleet unit trained to handle high-risk away missions. Impressed by your skills, Picard invites you to serve aboard the Enterprise-E.

This space RTS (yes, another one) is notable for featuring every Star Trek captain—including Jonathan Archer from Enterprise. It's a shame the game itself isn't any good, with unresponsive controls, drawn-out space battles, and the mystifying absence of any collision detection.