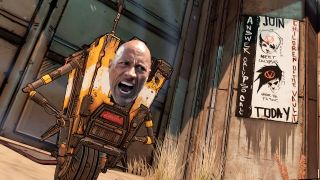 The Borderlands movie, announced way back in 2015, is still apparently on the cards, but it doesn't seem to have made a lot of progress in the last four years. Speaking to VG24/7, Borderlands 3 creative director Paul Sage said he was still "100 percent" up for the series' cinematic debut.

It's been a long time since we've heard about the movie, which is being produced by Avi and Ari Arad. Avi Arad founded Marvel Studios and was CEO until 2006, and the pair have produced a multitude of action flicks. They're also producing the Metal Gear Solid and Uncharted movies.

There's no hint of a cast yet, but for Claptrap Sage tossed out the idea of Dwayne 'The Rock' Johnson. "I think The Rock," he told VG24/7. "Yeah, The Rock has to play Claptrap!"

Why not? He was good in Moana. Maybe he could give the wee bot some gravitas. Art director Scott Kester threw Bill Murray into the hat. Dry, sardonic—sounds like a perfect fit.

The subject of Claptrap's voice actor is a bit of an awkward one. David Eddings, who voiced Claptrap in the previous games, said he would not be returning for Borderlands 3 because of a pay dispute. Soon after, Randy Pitchford called him "bitter and disgruntled", leading to Eddings responding with allegations of royalties still owed and assault.

Borderlands 3 is due out on September 13, but the movie has yet to be dated.