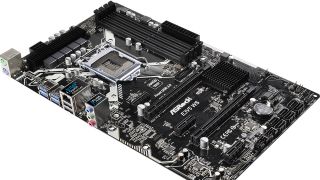 Towards the end of last year, ASRock claimed that a simple BIOS update would allow users to overclock non-K Intel Skylake processors, where base block increases are usually locked. Now the company has announced that it has four new non-Z170 motherboards coming which are designed especially to overclock these locked Skylakes.

According to Tom's Hardware, three of the motherboards will be intended for consumers (B150 Gaming K4 OC, H170 Pro4 OC, H170 Performance OC), while the fourth (E3V5 Gaming OC) is for socket LGA 1151 Xeon CPUs. They all support 10 phase digital power designs, multi-GPU configurations, and they all use the Realtek ALC1150 audio codec apart from the H170 Pro4 OC.

ASRock hasn't said exactly what adjustments it has made to get round the Skylake restrictions, nor do we know how much they will cost, but according to Tom's Hardware they will be less expensive than its low-end Z170 motherboards.