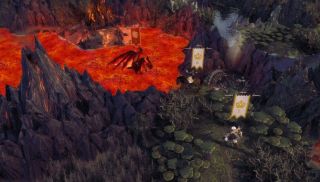 Here's 10 minutes of Age of Wonders III footage, introducing the dwarven Dreadnought Gustav and his predilection for technological hijinks. Really, the campaign slice we're shown is a magical - and violent - turn-based Ocean's 11. Our narrator gets himself into a tricky tactical situation, before stealing an entire city with a hitherto unrevealed plan: killing everything. That's a film I would watch.

Originally due this Autumn, Age of Wonders III was delayed to the first part of next year in order to ensure "an even better experience". From what we can see here, that "experience" already looks plenty promising. Here's hoping the extra development time will lead to some wondrous tactical strategy gaming.