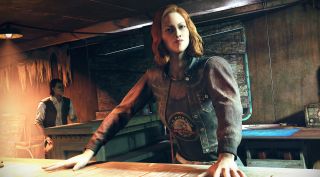 Bethesda is looking into a very odd bug in Fallout 76, introduced in the most recent patch, that appears to be breaking the legendary effects of armor when weapons are reloaded. The bug isn't consistent, but based on the number of complaints in this Reddit thread, there's definitely something going on that's not supposed to be.

Jas Thomson demonstrated the issue very clearly in a video posted to YouTube. When he begins, his armor has a damage resistance value of 519, energy resistance of 343, and radiation resistance of 25. After running through his armor set, he pulls a rifle, fires one shot, reloads, and then returns to the inventory screen, where those numbers are reduced to 414, 238, and 25. The condition of the armor pieces, and their individual resistances, remain unchanged, but the cumulative total has dropped.

Some users in the thread say that they haven't been able to reproduce the bug at all, while others claim that only certain pieces of armor are impacted; one user said that the bug is impacting his armor's primary effects, but not the secondary or tertiary. One theory making the rounds is that a fix to a legendary weapons issue in the new patch—"Reloading a weapon that has the '+250 Damage Resistance While Reloading' legendary effect no longer negates the effects of that weapon’s primary legendary attribute"—might be related to the trouble, but at least one player claimed that their Unyielding armor benefits disappear no matter what gun he uses.

It may or may not be related, but some redditors in the thread, including the original poster, also complain that harpoon guns and handmade weapons are breaking down much faster than they should. But again, reports on this area inconsistent: Some players confirm similar experiences with rapid breakdowns, while others say they haven't encountered it.

The lack of consistency makes the problem much more difficult to diagnose than it would be if it was easily replicated, but Bethesda said in reply that it's investigating and will update when it has more information. Until that happens, the Unofficial But Comprehensive Bug Roundup thread has a couple of possible workarounds: Unequipping and re-equipping the affected armor will reportedly reset resistances (not really a practical solution while you're being shot at, though), and some players have reported that crouching while reloading will bypass the bug entirely.