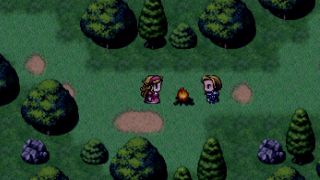 The turn-based tactical RPG A Princess To Save Me starts off in fairly conventional fashion: A princess is kidnapped by a wicked beast, and then saved by a handsome prince. The twist is that you are the princess, and your would-be savior gets himself killed shortly after his daring rescue. Now what are you going to do?

You can give up and die—that's actually an option—but the idea is to learn to fend for yourself. Not as part of a straight-up heroic role-reversal, though, but in the sense of moving beyond the expectations and limitations that other people place upon you. "The game is a conversation about vulnerability, love and a person's perception of self," the Princess To Save Me Kickstarter page explains. "What makes us helpless? What if the people we love want us to be this way so they can protect us, feel needed and appreciated? What if we were raised believing that we should not solve problems by ourselves, but ask for help instead?"

The Kickstarter campaign is seeking $10,000, which will go toward improving the game's graphics. Currently it makes use of assets from RPG Maker, which are the studio said in the Kickstarter FAQ look nice enough at this stage but are "very limited. There are only 4 sets of graphics for backgrounds, and characters do not have any combat animation. We need an artist to have more backgrounds, animation and to create custom UI."

A demo is available on the Kickstarter page and while it's brief, it does a good job of setting the overall tone for the game. The princess doesn't come off as spoiled so much as sheltered, while the prince, intentionally or otherwise, is a blatantly two-dimensional slab of hunky hero: Handy in a fight, but not too bright. It also reinforces the need for the princess to step up to the plate, because if she doesn't, things won't end well.

"I really want her to die there by the fire if she doesn't try to leave," developer Sandra Lokshina explained. "It's essential that at every point of the game a player actually does something (to the best of the princess' ability at any giving moment) to get themselves out of the situation. No one's saving them if they just sit there, not even us."

The Kickstarter for A Princess To Save Me is live now and runs until December 3.