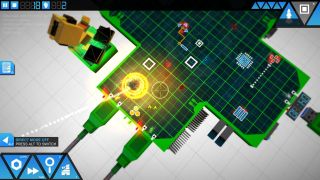 Artificial Defense was made by a single indie dev, who describes his game as “a real time strategy game that combines orbital shooter and tower defense components”. You’re tasked with defending a computer from waves of creeps, deploying traditional defensive towers alongside less traditional ‘Intrusion Counter Measures’, which can be sent to capture various structures on each map. It’s a twist on the tower defense formula that puts you in a less passive role, conquering additional parts of the map with creeps of your own.

However, I think it’s fair to describe Artificial Defense first and foremost as an orbital shooter, set in a tron-like representation of a computer's inner life. Moment to moment decisions revolve less around where to place a certain tower, and more about which of the three weapons in your arsenal to fire and where to aim. Bullets are fast, cheap and can hit multiple different places if you’re quick enough, while missiles are slower but deal more damage over a wider area. Bombs are slower still, but liquify everything within a massive radius. All but the slowest targets have to be lead, requiring you to judge their movement speed combined with the time it takes your projectiles to land. If you’ve ever tried to aim a sunstrike in Dota, it’s essentially that mechanic fleshed out into a game of its own.

Delivering death from above feels oddly satisfying considering the minimalist design, with a gratifying ‘squish’ sound punctuating each successful shot. Every shot feels like it has weight behind it, partly through good sound design and partly because every shot uses up RAM, the same resource that goes into spawning buildings and ICMs. Good aim is doubly incentivised, especially on some particularly unforgiving levels. Accidentally shooting ‘medic’ creeps knocks off a point of your own health as punishment for the triangle-based war crime. Apparently software based entities have rights too.

I found that towers and ICMs played second fiddle to my own ordnance, though it’s possible to take more of a backseat approach if you’re savvy enough with tower placement and capturing structures with ICMs. Still, with only two types of tower that can be built—one for short range, one for long—it’s never going to match the depth of a dedicated tower defense game. There’s a bit more to conquering with ICMs: working out which structures to get hold of first presents a different puzzle for each map, each providing a different benefit such as enhancing your towers or generating more RAM. Nevertheless, even the most efficient plans will need to be backed up by skillful orbital bombardment.

There are seven maps of increasing difficulty, each of which have seven different challenges to complete. Each challenge has three separate criteria which need to be met, such has surviving for a certain length of time, not taking any damage or accumulating a certain amount of RAM. Different challenges require radically different tactics to stop you falling into the same pattern round after round. Some challenges even forbid or severely limit the use of weapons, while others restrict buildings.

If a particular challenge is too tough, there’s always a generous number of alternatives available. It’s a neat way of allowing players to shape the difficulty to their liking, either trying to punch above their weight or slowly ramping up. Completing a challenge nets you currency that can be spent on upgrades to each weapon and tower. There are no options to choose from beyond which to upgrade first, and many of the upgrades are identical save for the bigger numbers attached to them. It’s still satisfying to reach each tier though, and some weapons do change significantly with certain upgrades: unlocking multi-fire missiles felt like a paradigm shift in my rocket based murder capabilities.

Artificial Defense is an interesting hybrid. While there might not be enough meat on its orbital shooter bones to spawn a whole genre, there’s easily enough to last a full game. It’s impressive work to come from a team of one, with smartly integrated mechanics, crisp presentation and a surprisingly good soundtrack coming together to make the game more than just a novelty.