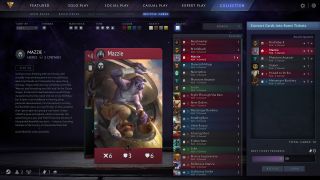 Artifact only launched yesterday, but it already has over 1500 negative Steam user reviews, earning itself a 'Mixed' status as of right now. Scrolling through the 'most helpful' negative reviews, a lot of them are focusing on the monetisation element of the game.

"An excellent card game, flawed by a terrible monetization scheme," says user Alixey in a review that has over 4400 helpful votes. "The gameplay and the mechanics are really good, which adds a breathe [sic] of fresh air to the genre, and the overall experience of the game itself. But the shady microtransaction practices prevent me to recommend it. The price of the purchase is not enough to fully enjoy it." You don't have to look that hard to find more reviews echoing those concerns.

The most upvoted positive review as I write this, meanwhile, is this one: "And now it's time for me to play my strongest card :credit_card:" You get the idea. At time of writing the the game has over 2600 positive reviews, too.

This isn't the first time concern has been expressed about Artifact's price beyond the $20 base game. Ville Kilkku broke down how much it'll cost to build a full collection last week, pre-launch, and found that $300 would 'comfortably' get you to a full collection (it's worth reading the piece for some in-depth analysis of how that's been figured out).

"The value of a full collection can therefore be expected to be somewhere between $200 and $300 in a week or two after the launch—it can be higher in the first few days, those are always a bit crazy with people rushing to the market to pick up missing pieces for their collections and supply not catching up immediately. If this does prove the case, the situation compares favorably to Hearthstone’s cost of around $200 for a full expansion set for an active player—and in Artifact, you can also sell your cards if you no longer want them, whereas every penny spent on Hearthstone is gone for good." This was pre-marketplace, of course. We'll have a piece exploring how that's affecting the game in the very near future.

In Will Bindloss's review-in-progress, he pointed out the possible problems created by the game's monetisation model. "I do have a few concerns about the monetisation model, though—if that purchase price doesn't deliver value, Valve could still have a mutiny on its hands. For now, I'll reserve judgement. In pure design terms, the potential for high-skill fun in Artifact is massive. And if the barrier to owning a competitive collection isn't prohibitively high, it should reach great heights." Expect a full scored review in the coming days.

Review bombing or not, Artifact has still reached a peak player count of over 60,000 at launch.