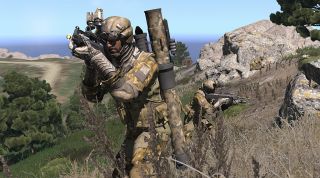 Arma 3 's alpha is just over a week old, but a few promising add-ons are already taking advantage of Bohemia's out-the-gate moddability. An inevitable carryover from the hardcore Arma 2 community is ACRE , or Advanced Combat Radio Environment, a mod-turned-mainstay for the majority of players for its realistic voice-comm behavior influenced by range, direction, terrain, and facing. It's as certain to appear in Arma 3 as scores of DayZ knockoffs, and this video shows off an already working early prototype in multiplayer.

Jump forward to around the 1:10 mark for some examples of ACRE's range-limiting and directional capabilities for voice chat. Arma veterans like Dslyecxi swear by it. "Terrain can influence it," he told us in an interview last year. "If you're in a forest it'll cause it to show shorter ranges. If you're moving away, their radio is having more trouble reaching you, they'll actually hear you distort and break up and eventually you'll lose them entirely."

For me, the added mechanics ACRE provides serves as yet another reason to fully jump into the Arma series' golden moments of teamwork and communication. I'd also like to see similar options for realistic comms in other military multiplayer shooters. Having the game environment affect how well a team trades messages would give a nice boost in immersion, not to mention tactics—the distance drop-off for voice could deliver impromptu ambushes and revealing eavesdrops.

Evan's gone full-tilt on covering Arma 3's alpha, and you can find plenty of info on the game through his videos and hands-on preview .