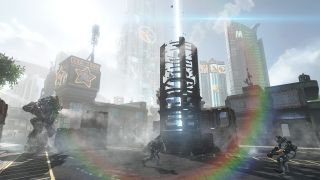 Three mysterious lights were recently spotted in the skies above Apex Legends' World's Edge map. They're too high up for players to get a closer look, but dataminers have offered up a rather convincing theory, potentially backed up by some datamined code.

Prolific dataminer Shrugtal posted their theory on Twitter yesterday, suggesting that it could be a Harvester from Titanfall. They speculate that it will eventually land on the map and suck out resources, as they do. This tracks with other teases from Respawn, relating to impending map changes.

One of these bad boys ("Harvesters") to suck out the planet's resources gonna land in Hot Springs then (typical corporate "improvements") . Going off the new zone name "Harvester". I think blue lights are almost certainly thrusters of a a ship carrying this? pic.twitter.com/llKUC1kosBJanuary 23, 2020

World's Edge currently features construction signs put up by Hammond Robotics, which built Titans for the IMC in Titanfall. The corporation also created the MRVN robots, of which Pathfinder is one, and the next Legend, Forge, is sponsored by it. It doesn't seem too far-fetched to imagine that the corporation might drop a Harvester onto the map to speed up the transformation.

Harvester is also the name of an upcoming zone, also spotted by Shrugtal. Fellow dataminer That1MiningGuy has dug up some details, too, giving the theory a bit more weight.

Pretty sure @Shrugtal is right about that light in the sky being a Harvester. They were reportedly used by both sides in Titanfall 2 and are used to extract minerals from a planet. Interesting. pic.twitter.com/ftcjQnW4YLJanuary 23, 2020

I sometimes forget that Apex Legends takes place in the same universe as Titanfall, mostly because I just think "mechs" whenever I think of Respawn's previous series, so I'm all for connecting the battle royale to the larger universe. There's not much time to enjoy the lore when you're fighting for your life, but it's nice to know it's hovering around.