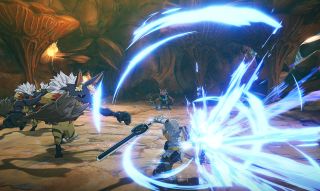 Bandai Namco has made a job listing that hints at a possible English release for action MMO Blue Protocol. The job posting, for an English language localization manager, likely means that Bandai Namco is planning on a release in the US, UK, and Australia. While there's no guarantee that this is the case, the job posting does ask for someone proficient in English to localize, including cultural changes, the UI, text, and cutscene voices. We've reached out to Bandai Namco for comment and will update if we get a response. (The job posting, here, is entirely in Japanese.)

Blue Protocol is an online action RPG set in a world “on the brink of devastation.” It got some notice when it was announced in Summer 2019 because of the anime-inspired shading in its visual style, similar to games like Ni No Kuni. It's developed by an internal team at Bandai Namco Online and Bandai Namco Studios that worked on Tales series of RPGs, Tekken, and Ace Combat. There was a closed alpha in Japan last year, and there is no release date. Here's the sole released trailer:

Cheers to the eagle-eyed Reddit users of the Blue Protocol Online community for the tipoff. Here's the official Blue Protocol website, in Japanese.