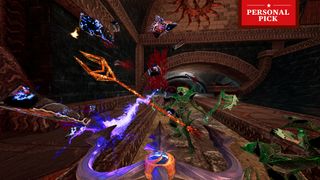 Of all the PC games I played in 2019, only Amid Evil has a staff that hurls shrunken planets as grenades. I got to casually blow up the Earth by lobbing it at an evil space wizard, and earned an achievement for my trouble. So, yeah, Amid Evil is pretty freakin' cool.

Along with Ion Fury and 2018's Dusk, Amid Evil is part of a thrilling '90s FPS revival that prioritizes speed and madness. I had a lot of fun with the reboot of Doom back in 2016, which tossed out a lot of modern touches (like, say, reloading) to get back to that '90s spirit. These games go further, though, and are either built on the bones of those old game engines or at least dialing back the graphics and technology to feel completely authentic to the era.

I don't want to sell Amid Evil short, here. I don't think it's great simply because I'm nostalgic for games of that era. I've never even played Heretic or Hexen, the shooters Amid Evil draws inspiration from. The rudimentary 3D graphics and grungy textures, the towering environments you skate through at high speeds, the mish-mash of medieval and gothic and cosmic all set a hell of a mood. This game has a vibe that just wouldn't be the same with more realistic graphics and movement. Some of today's game developers may make games like these out of nostalgia, but the good ones, like Amid Evil, prove how much life there still is in designing with those '90s limitations.

That's all getting a little heady. It's why I find Amid Evil so entrancing, but the shooting is always there to give me something satisfying to do with my mouse every few seconds. This game has a fun arsenal of weapons, like a sword that flings slices of green energy slicing through the air and an axe that you can twirl like a propeller through enemy flesh. They grow progressively more ludicrous, like the planet-launching staff and an arcane spiral of a gun that sends bolds of purple lightning crackling through anyone nearby.

Or, when you're in powered up "soul mode," it simply creates a black hole that decimates everything it can gobble up.

I love how powerful most of the weapons in Amid Evil feel to use, even when enemies also hit me hard enough to quickly tear me to pieces if I sit still. I'm constantly gliding around the room to dodge their attacks, picking whatever weapon seems best in the moment. Amid Evil follows in the grand tradition of having a weapon that flings baddies backwards and pins them to walls. This one is called the Star of Torment. It's like a mace, but actually cool.

Amid Evil is gleefully unconcerned with having a cohesive aesthetic, instead making each world a set of completely distinct levels with their own enemies ripped from a different cheesy metal album cover.

There are astral warriors who look like variants of Lord Zedd from Power Rangers. There are snakemen and floating space wizards. There are disgusting Cthulhu-esque blobs and geometric horrors with hook hands. Even if they're all simple to fight, the variety shows that if you're going to design a Doom-style shooter in 2019, you'd best account for modern attention spans. None of these enemies stick around long enough to get boring.

The same goes for the worlds you're running through. As Tyler mentioned in his review, platforming in a game where you move this fast can become tedious and annoying. That happens on occasion, when you're navigating some unnecessarily narrow steps or savescumming to make a perilous jump for the seventh time. But I rarely minded because the environments were so striking.

In one level I jumped across the pistons of an enormous machine and spiraled my way up obsidian towers impossibly suspended in the sky. In another I ran across bridges that intertwined like DNA, connecting parts of a cathedral floating in the cosmos. There's some weird Aztec shit. Amid Evil is the kind of game that results from creative people saying, "What's the wildest idea I can come up with? Okay, let's make that."

It relies a bit too much on finding the silver key for the silver door and pressing a button to open the next hallway, but Amid Evil's next hallway is always guaranteed to be a stunner.