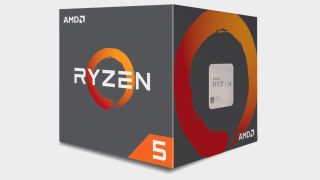 The Ryzen 5 2600 is a great budget option for gaming builds, and is an even better value with this deal. (Image credit: AMD)

Even though AMD's Ryzen 5 2600 is a previous generation slice of silicon, if you're looking to assemble a budget PC, it's still one of the best CPUs for gaming. That was true before it dropped in price, and is true today, especially with the latest discount.

There is a lot of value for the money with this CPU. It is a 6-core/12-thread processor with a 3.4GHz base clock and 3.9GHz boost clock. It also has 16MB of L3 cache and a 65W TDP. In our experience, this chip can usually hit 4GHz on all cores (and maybe a bit more) if you're willing to overclock.

Despite being a budget CPU, you can build a respectable gaming PC around this chip. How respectable depends on how much you're willing to invest in the GPU. A top-tier graphics card may seem like an odd combination, but with a 2080 Ti, some of the the faster CPUs in gaming beat the 2600 by around 10-25 percent at 1080p ultra (depending on the chip). We recommend pairing this with a sensible midrange GPU—in doing so, you wouldn't be able to tell the difference, outside of running benchmarks.