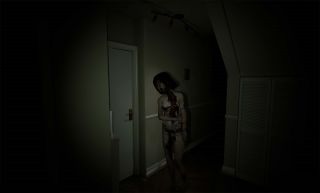 The P.T.-influenced survival horror game Allison Road, which we first laid eyes on in July, is now doing its thing on Kickstarter. The campaign is asking for £250,000 in financial backing, which works out to around $384,000, hardly an inconsequential amount but, the developers say, still on the relatively cheap side of game development.

Allison Road takes place in late autumn, in a quiet street in the suburbs of the city of Manchester. "With nothing but the sound of distant traffic and crows to pierce the omnipresent silence, you wake up one night without any recollection of prior events," the pitch says. "Now it is your turn to uncover what happened to your family, and face off against the horrors that await in the house."

The "wake up with amnesia" angle is well-worn, but the pitch references games like Resident Evil, Silent Hill 2, and Dead Space, which I take as a good sign, and promises a return "to the roots of true psychological horror." Stealth and exploration will be the key elements of the game, and it will support, but not require, VR. The team is aiming to have Allison Road ready for release by the end of 2016, which will require a post-Kickstarter expansion beyond its current ten members, assuming the campaign is successful. Stretch goals are currently limited to Mac and Linux versions at £300,000 and multi-language translations at £375,000.

"We’ve already put a plan in place using personal finances to get the game done no matter what happens, however this extra money can be used by us to hire a few more talented people, get the game done sooner and allow us to commit to more features and platforms too," the studio explained in the Kickstarter FAQ. "Even including the personal money we’ve already contributed, the cost for this game will be a lot less than most AAA games cost to make! It should be more expensive, but because we are paying ourselves below the industry average, we only have a basic office and we are using Unreal, it really helps us focus every resource we have on to developing the game."

The Allison Road Kickstarter campaign kicked off yesterday and runs until October 21, and it's off to a strong start, having already raised nearly £69,000. Find out more at allisonroadgame.com.