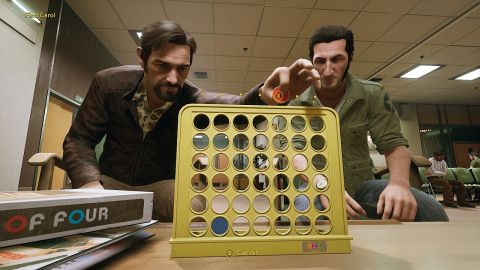 Messy, varied and inadvertently hilarious: A Way Out is an unusual but uneven tandem ride.

Five years ago, Brothers: A Tale of Two Sons seemed to have established Lebanese filmmaker Josef Fares as a bold new voice in games, expertly interweaving story and systems to memorable and moving effect. As such, A Way Out, Fares’ new game, is something of a comedown. Essentially a boneheaded B-movie you play with a friend, it’s not a very good game by most standards, yet between its goofy charm and a handful of creative flourishes, it’s a hard one to dislike.

This isn’t a game that can be played alone, and while you can go through the whole thing with an online pal, A Way Out is definitely best experienced over two or three evenings with someone sitting next to you. We’re introduced to Vincent—who's about to start a 14-year sentence for embezzlement and fraud—and Leo, six months into an eight-year stretch for armed robbery. Placed in adjacent cells, the two form an uneasy alliance over a couple of skirmishes in the yard and the prison canteen, before they discover a shared objective that convinces them to join forces and make their escape.

It’s no spoiler to say they get out: the title’s a pretty big clue, and EA’s promos have already given the game away. But as with any nuts-and-bolts thriller there’s some pleasure in watching the inevitable unfold while playing cliché bingo—and in this instance, of course, you’re taking an active role in the various chases, shootouts and narrow escapes that follow.

Split into 37 bite-sized chapters, it’s a restless game that maintains a brisk pace, though in its early scenes you’re asked to take things slowly and carefully. Here, it feels a bit like a simplistic co-op Hitman, as you use conveniently placed objects and environmental features to cause distractions or avoid detection. As a wounded Vincent you’ll occupy a nurse in the medical wing while Leo sneaks out to grab a chisel. Later, as he unscrews his toilet and chips away at the wall behind, you’ll play lookout, shifting the camera left and right to spot incoming guards, before engaging them in conversation to briefly delay their patrols. In a mechanical sense, it’s basic stuff—there’s usually a single solution to any given problem—but the context keeps things fresh.

Elsewhere, it’s more like a poor man’s Uncharted, with clumsy hand-to-hand brawls, and set-piece pursuits that see you running, riding or driving away from danger, often down fairly straight routes, with the camera sporadically giving you a helpful nudge in the right direction. At least they’re often well-staged—one standout sequence, set in a hospital, moves seamlessly between characters, the camera never cutting as it darts through windows and vents while you take it in turns to fight off or hide from the police.

One of A Way Out’s biggest problems is that its forced co-op setup doesn’t bear creative fruit often enough. You’ll give your partner leg-ups, catch them when they’re falling, or knock out a guard they’re grappling with: all things we’ve done this in numerous other games before. In fact, some of its best co-operative moments are either frivolous (splashing in a pond to guide fish so your partner can spear one) or incidental (a banjo-strumming rhythm-action interlude). There is, however, something strangely satisfying about coordinating your timing so you both shoulder-barge a door at the same time to force it open—or to climb up a vent back to back by matching each other’s rhythm in a simple Quick-Time Event. And it occasionally prompts healthy debate by forcing both players to agree on a route forward, with Vincent tending to offer a more pragmatic alternative to Leo’s brute-force solutions.

But any investment in the story is scuppered by a script that appears to have been written by a bot fed exclusively on dialogue from straight-to-DVD action films. You can almost guess the lines before they’re spoken—"With or without you, I'm going after him", "She knows me better than I know myself"—and when you can’t you have to cope with some forced banter that both leads sound embarrassed to deliver. As a result, the stabs at emotion in the final third are probably the funniest bits of the game.

Still, if it occasionally falls victim to David Cage-itis, at least there’s no uncomfortable nudity (the only instance is a brief flash of sidewang in the opening chapter). And there’s plenty to admire in its mad-eyed ambition, if not in how it plays, then at least in the way it strains to compete with blockbuster games with a fraction of the budget—and in splitscreen to boot. Accept that this is the work of a team whose reach has exceeded its grasp, and with a forgiving partner in tow, and you’ll probably have fun as this unlikely pair on the lam—even when you’re laughing at it rather than with it.

Messy, varied and inadvertently hilarious: A Way Out is an unusual but uneven tandem ride.