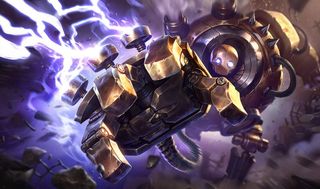 League of Legends is turning 10 this fall, and to celebrate Riot Games has a special event planned on October 15 that will include a livestreamed look at the past, present, and future of LoL—including teases of 2020's preseason changes and Teamfight Tactics next big update.

Oh, and developer Riot Games also announced in a press release that League of Legends sees about 8 million peak concurrent players logging in everyday—which probably makes League the most popular game in the world (not like that should surprise anyone). But it is bigger than the top ten games on Steam put together.

I say "probably" here because there is some competition. As I wrote about yesterday, one of the biggest games in Asia is Crossfire, a Counter-Strike clone on steroids that boasts a whopping 660 million registered accounts and, according to developer Smilegate, also 8 million peak concurrent players. So it's not exactly clear who actually wins The Most Popular PC Game award.

Still, it's crazy that a 10-year-old game like League of Legends is so damn popular. If you're excited to learn about what's next, tune in to League of Legends' Twitch page on October 15. Though the stream will likely be active all day, at 6 pm PST Riot will be hosting a special anniversary edition livestream of their Riot Pls vlogs, which will act as the main presentation for the event.