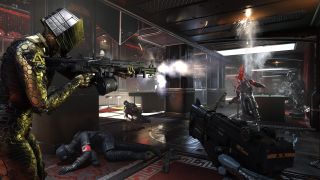 While you're busy killing Nazis in co-op FPS Wolfenstein: Youngblood, you can collect coins from the environment which you can then spend on weapon skins, cosmetics and emotes. You'll also be able to spend real-world money on gold bars which can be exchanged for those coins. But contrary to some reports this week, you won't be able to buy in-game weapon upgrades that way.

According to a Bethesda comment in this  VG247 interview with MachineGames, only cosmetics will be purchasable. Originally, it seemed a Wolfenstein: Youngblood developer had said during an E3 roundtable that weapon upgrades would also be purchasable, speeding up gameplay progression.