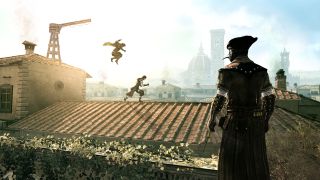 Time marches on. Games come and go. But while it's (usually) never too late to go back and play a singleplayer game you're fond of, it can be much trickier playing the multiplayer mode of that singleplayer game after years (or even decades) have passed.

And that really sucks! Sometimes you just get that urge to dive back into a multiplayer mode you loved, which makes it a special sort of bummer when there are no servers left online or there's simply no one around who still plays it.

So let's take a sad yet fond little trip down memory lane and talk about the multiplayer modes of yore we used to love. What multiplayer mode do you really miss playing? We've got some of our favorites below, and we'd love to hear yours in the comments.

For weeks after its release in 2014, I became obsessed with Watch Dog's online hacking multiplayer mode. You could choose to enter a stranger's singleplayer game without them knowing, and while disguised as a random citizen, get close enough to them to start hacking their data. It was voyeuristic bliss, walking and driving around in someone else's game when they had no idea they were being spied upon. And often pretty tricky to act casual while trying to get close to them. Once you started hacking them, they'd be alerted and had a certain amount of time to figure out which nondescript NPC you were masquerading as. If you successfully evaded detection, you'd have a certain amount of time to flee the area without being killed.

It was an exciting and often funny (as you watched them frantically search for you) cat-and-mouse game, and while playing in my own singleplayer game I became extremely paranoid that there was always another player who had infiltrated and was hiding somewhere in plain sight. It was fantastic fun and probably my favorite multiplayer mode of all time.

Coming out in 2010, BioShock 2 found itself in the middle of a strange era where every singleplayer game, no matter how literary, had to have a multiplayer mode. Publishers wanted to protect against people selling their Xbox 360 and PlayStation 3 copies back to GameStop after completing the campaign. Voila, BioShock 2: Capture the Sister. "The goal is to bring the Little Sister to the designated Little Sister Vent as many times as possible before the time limit runs out, and then to prevent the enemy team from doing the same," the BioShock wiki reminds us. "The winning team is decided by who has the greater number of Little Sisters captured." Ah, the pastime of playing football with mutant drug children.

BioShock 2 fully embraced the awkwardness of turning its intricate story and setting into a deathmatch. You played as one of 10 unique characters living in Rapture at the outset of the civil war. Each had their own backstory, melee weapon, and loads of custom, situation-specific dialogue that you'd hear during matches (Mlle Blanche de Glace, a French actress, might say "So strange on this side of the camera," when using the Research Camera to earn a damage buff against an enemy). BioShock 2 characters' appearance was tied to their progression—as they leveled up, they'd look more and more like a mutated Splicer, a reflection of their abuse of ADAM. The multiplayer lobby itself was a Rapture apartment, and your character would receive new, unique messages on their answering machine. The whole thing was framed as a prequel for the first BioShock, grounded in an idea that had taken hold in Team Fortress 2 and many games that followed: yes, you can and should put story into a multiplayer FPS.

Did you know Kane & Lynch 2 had a multiplayer mode? I forget myself sometimes, but it was a lot more clever than it had any right to be. There were a bunch of different match types, but the best was Undercover Cop. Here a team of thieves had to work together to pull off a heist—except for one randomly selected player, the titular undercover cop, whose job it was to sabotage the effort and prevent them from escaping.

The game itself is a fairly average third-person shooter, but this betrayal element made multiplayer worth dipping into. Alas, finding someone to play it with now is basically impossible.

I was really unhappy when I learned that Mass Effect 3 would have a semi-mandatory multiplayer mode. I don't begrudge people playing online however they want, but I'm all about the singleplayer and had zero interest in sharing my intergalactic adventures with the great unwashed. But I was also determined to crank my Galactic Readiness to the max, so in I went. And I'm glad I did, because it was a blast. Strictly co-op, it put four players up against increasingly difficult waves of enemies from various Mass Effect factions, with special objectives popping up here and there throughout. After surviving ten waves, teams would have to move to an extraction zone and hold out until retrieval.

The different Firebase maps were big and varied enough to be interesting and tactical, but small and interconnected enough to be manageable, even for newcomers. Mass Effect's different classes and races were supported, so players could take it on in whatever style struck their fancy. And it was really exciting. The shooting was aces (say what you will about Mass Effect 3, but it had the combat side of the game nailed), the integrated missions, small levels, and collective rewards ensured that players actually worked together, and at the higher difficulty levels the extractions could be incredibly hairy. (But also incredibly lucrative, so as Michael Ironside once said, everyone fights, no one quits.)

I never stopped feeling a little annoyed at the "forced" multiplayer, but long after my Galactic Readiness was maxed out, I was still playing. That says it all.

When I tried Psi-Ops in co-op for the first time, I was convinced that something had gone terribly wrong. Instead of letting us play as two psychic special agents, we were playing one. Together. I controlled most of his body, so I was moving and aiming, while my buddy could shoot and use psychic powers—which is some serious bullshit, since they're the best bits. It's just so stupid and I love it. It's like piloting a ship in Elite with a mate, one of you flying and the other on turrets, but you're some dude. Third-person co-op shooters often don't require real coordination or communication—you're fighting next to your mate rather than with them—but in Psi-Ops you can't get anything done without constant teamwork.

The only other time I've seen this crop up again is, surprisingly, in Heroes of the Storm. Cho'gall is a two-headed ogre and counts as two heroes. One player controls movement and tanks, while the other aims and takes out distant enemies as a ranged assassin. It's the best fun I've had with the MOBA.

I'm going to cheat a bit here and mention a mode that I never actually played myself. I heard about Siege a few years ago and had to send someone to play it and write an article about the experience, because it just sounded so cool. Turns out, it really was. Siege was "an ambitious mod project years ahead of the curve, which feels like it could have followed a modern developer’s playbook: A team-based, class-based FPS where interlocking team composition is key to victory."

Since Siege was built on top of Hexen, some classes could cast spells while others had powerful melee weapons. The range of possible interactions in a multiplayer match was pretty wild. Some classes could dig tunnels. Others could climb walls. Spells could heal or kill or let you fly. This predated Team Fortress, and was even more ambitious in what you could do within a match. Winning as the offensive team involves breaking or sneaking into the enemy fortress (by knocking down the drawbridge, or scaling the walls, or tunneling behind them), finding your way through a mazelike fortress, getting a key off a defending player, and reaching the throne room. It's the kind of game that would totally fall apart without heavy team coordination. I'm sure it would fall apart with a matchmade team. But man, if you had the right group, what a cool game.

I was properly obsessed with Assassin's Creed's short-lived competitive multiplayer. Introduced in Brotherhood, it was a slick, high-budget riff on something like The Ship, or a kind of PvP Hitman. Each player chose an avatar, and the map was then populated with identical NPC clones of that pool of characters. They'd go about their routines—chatting, forming crowds, shopping at a market, that sort of thing—and your goal was to blend in among them at the same time as trying to determine which of them is actually your target. Of course, someone else would be hunting you, too. Multiple people, if you were doing well.

It was multiplayer that was all about deduction and clever subterfuge, rather than twitch reflexes, and the resulting cat-and-mouse games were delightfully tense. Being genuinely stealthy was not only a safer way to play, it earned you more points. I became a master of poisonings: bumping past my target in a crowd, seemingly having not noticed them, only for them to fall over choking a few seconds later. Incredibly satisfying.

I loved how solitary it was. Almost all multiplayer these days is about team coordination, but this was a very deliberately solo experience (though there were optional team modes). Not only did that force you to focus 100% on your own skills and performance, the lack of team chatter made it much more atmospheric too.

It wasn't perfect, though. One of its biggest problems was that matches really fell apart if players didn't get into the spirit of things, or didn't understand what they were supposed to be doing. If your target was just running around the rooftops like a maniac, there wasn't really any clever or stealthy way to take them out. You either had to chase them, exposing yourself to your own hunter, or abandon the contract, wasting valuable time. Bafflingly, some of the gadgets and skills you could choose from seemed to encourage being a reckless idiot—you could, for example, just take a straight up gun and loudly shoot people. It exposed you completely, and earned a pittance of points, but it was still a frustrating tonal mis-match.

So when Revelations came around, I was excited to see how they'd tighten things up. Instead, it only proved more bloated and confused, as more and more stuff was shoehorned in to bulk out the progression and justify microtransactions. By the time we got to Black Flag, the magic was truly gone (even if the pirate setting made it agreeably ridiculous), and Ubisoft just abandoned the idea entirely in the end.

I still mourn it. With some clever tweaks and streamlining of Brotherhood's foundation, it could've been basically my perfect multiplayer experience. But sadly I suspect it was probably never what the Assassin's Creed audience was looking for, and now that the series is about open-world RPGs rather than stealth action, it seems almost impossible it could ever return. Oh well.