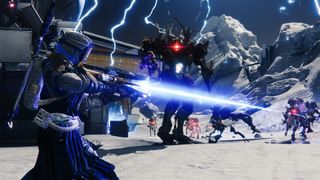 What is the Vex Offensive? The Vex have invaded Bungie's space MMO once again, and in addition to the Destiny 2 Garden of Salvation raid, this time we're beating them back in a new activity called the Vex Offensive. This is a six-player matchmade horde mode accessed via a playlist on the Moon.

It's a 750-Power activity, so everyone can participate provided they own Shadowkeep and the Season of the Undying season pass (which are bundled together). Bungie says the activity will evolve throughout the season—with a mysterious 'Final Assault' planned for later this Fall—so it should become more difficult as the season progresses.

Vex Offensive is one of the most enjoyable and rewarding activities in Shadowkeep and Season of the Undying—once you've unlocked it by completing the Eyes on the Moon quest, that is. It's sure to be a mainstay grind before it disappears at the end of the season. So I've put together a guide in making the most of the Vex Offensive, how to beat it, what gear to use, and the best loot to target.

How to beat Vex Offensive

As a horde mode, Vex Offensive sits somewhere between Reckoning and the Menagerie in terms of difficulty and complexity. It's split into three rooms: two full of enemies and one with a boss inside. Naturally, all three rooms are overflowing with Vex, including Barrier and Overload Champions, which are weak to special modded ammunition accessed via the seasonal Artifact. This affects what gear you'll use and how you play, but we'll go deeper into that in a bit.

To start the encounter, use the 'Hack' prompt at the designated Vex node in the first room. Loads of enemies will spawn in: kill them to fill a progress bar. Packs of enemies will appear around the nodes in the area, so once you clear out one pack, rotate to a new node.

This article was funded as part of a paid partnership with Bungie to promote the PC Gamer clan. Find out more, including how to join, here. All Destiny 2 content on this site—including this article—was created independent of Bungie, and solely reflects the editorial opinion of PC Gamer.

The second room follows the same pattern, but with two key differences. First, 12 Oracles will spawn in the second round of enemies, so you'll need to pick up and use more lasers. Second, you'll encounter multiple Barrier and Overload Champions, and the amount of each Champion type varies between runs. Sometimes you'll get mostly Barrier Hobgoblins, and sometimes you'll get tons of Overload Minotaurs.

Ensure that someone in your party will have the right weapon mod equipped to deal with them, but equally, you can hedge your bets by keeping a weapon with Anti-Barrier Rounds handy. You can also use the Season of the Undying rank one exotic Eriana's Vow as an Anti-Barrier stand-in if you haven't unlocked special rounds on your Artifact. In any case, just shoot the baddies, break the Oracles, and grab that loot.

The final room is a boss fight which puts a slight twist on the laser mechanic. Again, start the fight by hacking the central node, but place and use a raid banner before you do. Keep an eye out for all the heavy ammo and Super energy you can get and take a moment to memorize the layout of the room. There are three nodes: near the area's entrance, one in the back-right, one in the front-right, and one in the middle. This orientation will come into play later, so commit it to memory.

When you initiate the fight a big Minotaur boss spawns in the centre of the arena. It'll be immune when it spawns, so ignore it for now. Instead, head to the back-right node and start killing the enemies that spawn around it. While you're killing them, the boss will walk toward the back-right node. Once it gets there, more Gate Technician Minotaurs will spawn in.

They drop lasers when they die, but this time, use the lasers to break the boss' immunity shield instead of shooting Oracles. Depending on your aim and what buffs you have active, it'll take five to seven lasers to break his shield. Once you break it, the boss will be vulnerable to DPS. This is your cue to burn him down.

You'll have about 30 seconds of DPS each time you break the boss' shield, as indicated by the timer on the right side of the screen. When it runs out the boss regains his shield and head to the next node. The boss moves between nodes in the following order: back-right node first, front-right node second, middle node third.

You should have no problem killing the boss within three nodes, or even two if you've got a good mix of Supers and heavy weapons in the party. Kill enemies, dispatch Technicians, break the shield, and melt the boss. Repeat this cycle until the boss goes down and you can loot the final chest, which doubles the loot.

Now onto the and abilities and best Vex Offensive weapons to use. The faster you kill things, the faster you'll get loot and materials, so optimize your loadout accordingly.

You can pretty much use whatever primary weapon you'd like for Vex Offensive (as long as it's not a sidearm). However, the Recluse submachine gun is especially good here. It chews through normal enemies like nothing, and its Void damage will make short work of the shields on the Gate Technician Minotaurs. Sunshot is also strong given the density of groups, and weapons with Dragonfly-type effects—like the curated Nation of Beasts hand cannon or Ace of Spades—are great for the same reason. Thanks to its new Exotic Catalyst, Cerberus +1 is also very strong.

Pair your primary with an appropriate special weapon. Vex Offensive features basically every type of Vex enemy. In other words, there's a mix of close-range and long-range enemies, so you need a way to deal with both. If you're using Recluse, a sniper rifle like Izanagi's Burden is great for handling distant Cyclops and for sniping the final boss' weak spot. If you're using a scout or pulse rifle, a shotgun or fusion rifle will be great for the Gate Technicians and other close-range enemies. Loaded Question is effective, and any One-Two Punch shotgun will do the busines. Or just about any shotgun, really. It's hard to screw up a shotgun.

For your heavy weapon, you can go full add-clear with a machine gun or focus on boss DPS with a grenade launcher. Old favorites like Delirium 21%, Wendigo GL3, Outrageous Fortune, and Swarm of the Raven, as well as exotics like Anarchy and One Thousand Voices, will do just fine. Tractor Cannon is also very strong, as it will weaken the boss and straight-up delete the Gate Technicians.

If you don't have a well-rolled heavy weapon and your choice of exotics is limited, you can get a great machine gun (A Fine Memorial) or grenade launcher (Love and Death) through the Essences available at the Lectern on the Moon. For A Fine Memorial, Feeding Frenzy and Rampage is the dream roll, and for Love and Death, you want Spike Grenades with Field Prep and Full Court. Any rolls in that range will do just fine.

I normally wouldn't recommend using a rocket launcher since rockets are just bad, but there is one notable exception: the new Deathbringer exotic, which excels at pretty much everything in Vex Offensive. There's tons of vertical space to give its projectiles time to build up Void damage, which rips through Gate Technicians, and you can pre-fire it overhead to insta-kill waves of Vex as they spawn.

Now let's move onto the ideal subclasses. Vex Offensive is a six-player matchmade activity, so unless you're running with a full team, you won't have any control over your class makeup. Fortunately every class performs well in Vex Offensive, and no matter what one you use, you'll get there in the end. This isn't like Reckoning where you have to have a Warlock running Well of Radiance or you'll just be miserable. That said, some subclasses are stronger than others in certain situations, so here are my personal recommendations.

Most of Vex Offensive consists of big waves of enemies, so AoE is the name of the game. That said, bottom-tree Nightstalker is the way to go here. Moebius Quiver and Heart of the Pack got huge buffs in Shadowkeep, so bottom-tree Shadowshot is now good for boss damage and wrangling groups. It has more utility than Celestial Nighthawk and Golden Gun, and its add clear is comparable to a fully loaded Arc Staff.

Well of Radiance was nerfed in Shadowkeep, but it's still plenty good, so middle-tree Dawnblade remains a fine choice for Vex Offensive. That said, between Well of Radiance and Ward of Dawn, you really don't want more than two support Supers in your party, so plan accordingly. Outside of Well of Radiance, top-tree Stormcaller is great here. Its Arc Web grenades devour dense groups, and Stormtrance—plus the free campaign Exotic Stormdancer's Brace—will delete everything in sight. Top-tree Voidwalker, with its charged Void grenades and splitting Nova Bomb, is also great for obliterating waves of enemies and Gate Technicians. Nova Bomb also provides a hefty chunk of damage in the limited boss DPS window.

Titans are also spoiled for choice in Vex Offensive. On the one hand, Ward of Dawn is the best Super in the game on top-tree Sentinel. On the other it has one of the best add-clearing Supers in bottom-tree Fists of Havoc. However, I would lean toward top-tree Sentinel because it lets you use Sentinel Shield in the first two rooms and Ward of Dawn against the boss, plus you can support your allies with Defensive Strike during the whole activity. And again, its Void abilities are great for the shields on Gate Technicians.

Vex Offensive isn't just fun: the loot is pretty generous, too. Every completion nets you at least four drops from the Vex pool of gear: two weapons plus two pieces of armor. You can also purchase cheap, easy, repeatable weapon bounties from Ikora to farm specific weapons, making the grind even more rewarding. There are too many armor rolls to count thanks to the Destiny 2 armor 2.0 revamp, but we can nail down some recommended rolls for the Vex Offensive weapons.

Recommended PvP roll: Eye of the Storm (or No Distractions) + Snapshot Sights (or Multikill Clip)

We'll update this guide as Vex Offensive evolves throughout the Season of the Undying. It's possible we'll see new weapons added to the loot pool, or new bosses and mechanics added to the activity. For now, it's a fun and rewarding grind which will keep you busy for hours, so get shootin'.