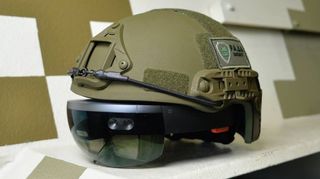 $479,197,708.33—that's how much a US Army contract will pay Microsoft for an "Integrated Visual Augmentation System." The contract was awarded to Microsoft on November 20, and today some of the company's employees have written an open letter to CEO Satya Nadella and president Brad Smith protesting the move and asking the company to "Cease developing any and all weapons technologies."

The letter, titled "HoloLens For Good, Not War," begins with the statement that "we refuse to create technology for warfare and oppression. We are alarmed that Microsoft is working to provide weapons technology to the U.S. Military, helping one country's government 'increase lethality' using tools we build. We did not sign up to develop weapons, and we demand a say in how our work is used."

The letter goes on to say that Microsoft plans to use HoloLens, its augmented reality headset, for this purpose. We actually reported on that back in November, when the contract was awarded. At the time, Smith wrote a blog post defending the company's military partnerships.

That blog apparently didn't satisfy the employees who wrote today's open letter, as they stated "While the company has previously licensed tech to the U.S. Military, it has never crossed the line into weapons development. With this contract, it does. The application of HoloLens within the IVAS system is designed to help people kill. It will be deployed on the battlefield, and works by turning warfare into a simulated 'video game,' further distancing soldiers from the grim stakes of war and the reality of bloodshed." The letter goes on to point out that many engineers worked on HoloLens before the contract existed, and are now seeing their work repurposed for military use.

On behalf of workers at Microsoft, we're releasing an open letter to Brad Smith and Satya Nadella, demanding for the cancelation of the IVAS contract with a call for stricter ethical guidelines.If you're a Microsoft employee you can sign at: https://t.co/958AhvIHO5 pic.twitter.com/uUZ5P4FJ7XFebruary 22, 2019

The letter was tweeted publicly on Friday by Microsoft Workers 4 Good, asking for more employees to sign. According to a MS employee speaking to The Guardian, more than 50 employees had signed shortly after the letter was posted.