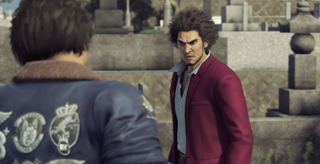 Think of Yakuza and the first thing that probably springs to mind is the series’ chunky, Virtua Fighter-esque fights. Previous series lead Kiryu has been dishing out realtime, bone-breaking fisticuffs for over a decade, but—as revealed last week—the forthcoming Yakuza 7: Like a Dragon will implement turn-based battles for the first time in the franchise’s history.

On Twitter, user Nibel linked to an interview with the game’s dev team taken from a recent issue of Famitsu. Another user, BlackKite, then posted a side by side Japanese to English transcription of the interview, with Sega saying the new system has been designed to make new protagonist Ichiban Kasuga more of a team player.

According to the transcript, RGG Studios wants to transform Yakuza 7 into an action-RPG, rather than straight out action-adventure. “He’s not simply a strong man who can enter enemy bases on his own, he fights with his friends. The system presents it straightly as an RPG.”

That’s not to say this will be a traditional turn-based system. The interview also states players will have to keep aware of their surroundings, as nearby objects and vehicles can be used on the fly to influence scraps. “[Fights] will be controlled by factors surrounding things in real-time. For example, if there are trash cans or bicycles nearby then can use them to attack by kicking them. If a car passes by they can be run over, so you’ll need to assess your surroundings.”

The other big headline news from the interview is that Yakuza 7 could apparently be twice as long as previous entries in the series. “The total play time will be longer than the past. It will take more than double the main story alone.” Past Yakuza titles were hardly short, so Kaz’s latest could be damn near life-swallowing.

Other highlights from the interview? Ichiban has a squad of friends he can give jobs to, you can assign various pieces of equipment to different parts of his body, and the map contains areas populated by ultra tough enemies that can only be defeated once you reach a certain level.

As for why Yakuza 7 is being treated as the next numbered sequel despite the new combat style and protagonist, the devs say, simply, that "the studio thinks this is a legitimate Yakuza game". Certainly if all these features come to pass, Yakuza 7 could well be the most ambitious entry in a series that’s never been afraid to take chances—remember the zombie slaughter of Yakuza: Dead Souls?

Yakuza 7 isn't yet announced for PC, but Sega does consider it to now be a multiplatform series. So never say never.