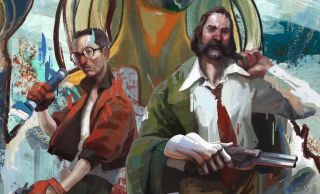 Lieutenant Kim initially comes off cold and judgemental. It's hard to blame him. The detective RPG Disco Elysium begins with what probably feels to him like some cosmic joke. He arrives in Martinaise to solve a murder case and is met with a decomposing victim, no suspects, and a hungover, amnesiac detective as his temporary partner. Kim remains aloof throughout the investigation, but an empathetic enough detective can manage to uncover brief moments of vulnerability from Lt. Kitsuragi. Those hard-earned interactions have been enough to make him the game's breakout star. Which was not at all what the team at developer ZA/UM expected.

"Honestly, we're surprised people like him so much," says lead writer Robert Kurvitz. "Of course, we always adored him. All these years playing the game, testing it, writing it. We got to spend a lot of time with Kim. And we always felt he's a real person and our friend."

All of Disco Elysium's characters feel like real people. Each one has a history and memories that, unlike NPCs of other RPGs, aren't keen to spill their guts at the protagonist's feet upon first meeting. As the detective's partner, Kim has multiple threads to his backstory waiting to be unraveled. "We wanted Kim to open up through the scenes and situations you get into," Kurvitz explains. "Not by clicking on him and cleaning out his tree."

Because of that philosophy, the player is unlikely to uncover everything there is to know about Kim in just one playthrough. With certain combinations of skills or experiences, the detective can have interactions with Kim that couldn't be achieved by playing with a different build.

The detective's Thought Cabinet, the limited inventory reserved just for exploring various ideas, can lead to avenues for conversation with Kim and others that cannot be unlocked otherwise. The Aces High thought, when internalised, allows the detective to find out that Kim is an Aerostatics enthusiast. Other Thought Cabinet options can lead to more revelations about Kim. In theory, Kurvitz says that Kim has Thought Cabinet ideas of his own. Like the detective's, they each take time to internalise and provide boosts to other attributes when completed.

"I like to think Kim has a Thought Cabinet project called Revolutionary Aerostatic Brigades that he's worked on since he was a teenager," Kurvitz says. "This raises the learning caps for his Reaction Speed and Interfacing."

Kurvitz stresses that Kim doesn't actually have a character sheet hidden in Disco Elysium's code. Imagining that Lieutenant Kitsuragi has only one natural attribute point in Motorics helps the ZA/UM team to understand the depth of his character beyond what's referenced in the game's dialogue. "We just came up with this stuff for coherency," says Kurvitz. "And because we're nerds."

Unlike the detective, Kim doesn't have a 'copotype', Disco Elysium's witty and often sarcastic way of allowing the detective to define his modus operandi with monikers like 'hobo cop' and 'art cop'. If you were able to ask Kim what his copotype is, Kurvitz says he would reply quite matter-of-factly that "copotypes are stupid".

Kim's high Volition skill makes him impervious to prying, Kurvitz says, as the detective can find out on occasions being met with Kim's brick-wall resolve. Kim often chastises these whims of the detective's, but will occasionally play along. The Lieutenant finds his new partner funny, says Kurvitz. In one instance he'll engage in (and win) an unspoken nod-off. Elsewhere, he indulges the detective's fascination with cryptid hunting. It's the conscious effort Kim makes to break his own persona that gives him a warmth that's so endearing.

Disco Elysium isn't entirely voice-acted, but the specific moments when characters speak lend an extra layer to their personalities. Of all the voices in game, Kim's is one of the best. He's written as soft-spoken but stern, qualities that Kurvitz says were enhanced by the perfect actor.

ZA/UM knew that, as a Revacholian, Kim had to sound vaguely French but it took an entire four years to find the right voice. Jullian Champenois was the only one who could bring "the cool, the deadpan, and the warmth" of Kim's personality together.

Disco Elysium is equal parts grim and hopeful, as is Lieutenant Kitsuragi, the buttoned up cop who's occasionally willing to rip a few pages out of his by-the-book attitude. "You're in this awful mess and literally nothing and no one is on your side—except Kim Kitsuragi," says Kurvitz. "It just so happens that he's great. A great detective and a great human being."