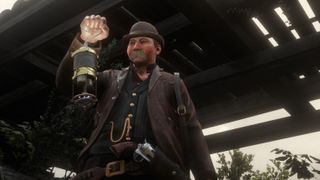 I'm no longer a cowboy in Red Dead Online. I don't ride around with a gun in my hand these days because now I carry a metal detector. At all times. Walking through towns, riding through the wilderness—I even carry it when I enter the saloon to play a bit of poker. And the moment after the metal detector has led me to a buried treasure and I replace it with my shovel to do some digging, I pull it out again immediately. You never know! I might get another hit. And I often do.

The metal detector in RDO (part of the collector pursuit) is a bit silly, a sort of steampunk lantern with a dome at the top that blinks and a little circle of alchemical sparks that glow at the bottom when you're near a buried treasure. Despite the fact that I've got two pistols strapped to my hips, a gaudy belt buckle, metal buttons on my vest, spurs on my boots, and lord knows how many bullet fragments inside my pudgy body, the only thing that sets this magical metal detector off is a buried coin, a forgotten arrowhead, or a box of hidden jewelry.

Is it logical? Nope. But I don't care. I love using detectors in games. Any kind of detector! Anything that blinks or beeps or flashes when I'm near some hidden stash, and does these things faster when I'm closer to whatever it is I'm trying to find, is instantly my favorite tool.

I was never a big fan of the car segments in Half-Life 2. The scout car's handling was awful, it was ugly, and you could never drive for more than a few seconds without having to get out and deal with antlions or Combine jerks or to poke around some crummy, ruined house looking for spare ammo.

But in Half-Life 2, Episode 2, they replaced the scout car with a muscle car, which had a throaty roar, an extra seat so Alyx could ride with you, and most importantly, it had a little dashboard-mounted radar screen that would pick up the location of hidden rebel supply caches in the world.

Suddenly stopping every couple minutes was fun because there was a beep and a dot on a screen pointing to something. That's all I needed to suddenly enjoy driving around in Half-Life 2—a good reason to stop driving around in Half-Life 2. Now, hunting around those crummy houses was enjoyable, somehow, thanks to my detector. Dying Light's car-based expansion, The Following, also let you drive around looking for geocached loot stashes. Cars are better when they're really just proximity detectors on wheels.

And there's no better detectors than the ones in the Stalker series. They helped you navigate the deadly world by detecting anomalies and artifacts, beginning with the basic echo detector, which would beep more rapidly as you got closer to rudimentary artifacts. The bear detector (it didn't detect actual bears, sadly) was an upgrade that would point you more precisely in the direction of an artifact using a glowing green ring around the edge of the circular screen. The svarog detector was the most powerful of them, pinpointing both anomalies and artifacts on an easy-to-read radar screen.

But if I'm being honest, I love the basic echo detector best. There's just something about an item that beeps more urgently when you're getting close to whatever it is you're looking for. It makes it exciting, like playing hide and seek.

Maybe my love for beeping detectors stems from the motion tracker in the 1986 film Aliens (you get to use one in Alien Isolation, too), with the difference being the thing you were detecting was trying to find you and not vice-versa. Whatever the reason, whenever a game hides something on a map and gives me an item that beeps when I'm close to it, I'm happy to ignore pretty much everything else and just walk slowly around, listening to beeps with my head down, until I find it.