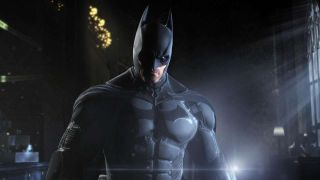 In September 2019, Warner Bros released a short video celebrating the 80th anniversary of Batman, which contained symbols that many people took as a tease for a new Arkham game. The next day, another symbol-laden tweet appeared, with the header, "Capture the Knight," a far more overt hint that some kind of new Bat-stuff is is in the works.

That was the end of it, though—until today, when a new tweet appeared, with a partial new symbol.

It bears a resemblance to a Gotham City Police Department badge, particularly in the eagle across the top and the laurels along the sides of the shield, and the city skyline across the top of the shield, with the clock tower in the center, looks very Gotham-like. (Gotham's prominent Clock Tower served as the Oracle's base of operations in the previous Arkham game, Batman: Arkham Knight.)

Whatever it ends up being (another Facebook commenter suggested it could be an Argus badge, although I think that's unlikely—it's way too traditionally cop-like for a pseudo-super-group), it fits with the factional tease motif that WB appears to be pursuing, possibly setting up a big showdown in Bat-Town—with the man himself caught in the middle.