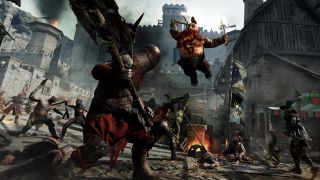 Vermintide 2 will soon let its ragtag group of heroes deck themselves out with cosmetic items without making sacrifices to the petty gods of RNG. Instead of praying their random loot drops will give them what they want, players will be able to hit up a new in-game store, and for the most part they won't have to dip into their wallets.

Whenever a game adds a store after launch, there's some grumbling in the community. It recently happened with Rocket League, which ditched loot boxes for an item shop and blueprints system, upending the player economy. In Vermintide 2's case, however, the scope of the store is smaller and simpler. Fatshark CEO Martin Wahlund says the goal is to let players get their hands on more cosmetics.

"From the get-go, we've had a lot of cosmetics in the game, but it's hard to get them," he says. "They're rare and sometimes people haven't been able to target the ones that they want. We thought we should have a system where people can have long-term goals to work towards certain cosmetics for the classes they play or the ones that they like."

You won't need to juggle lots of different currencies or craft items like you would in Rocket League or Warframe. You just pick the item you want and purchase it with your earnings from quests.

"You earn currencies through daily and weekly quests," Wahlund says. "These quests have been in the game for a while and we're going to add more over time. If you do them, you earn a certain amount of coins and purchase stuff in the store. I can see it going through lots of iterations in the future, but it's very simple."

The three main things you'll be able to grab are hero skins, hats and weapon illusions, but more items could be added in the future. The vast majority of the items will be available effectively for free, costing only in-game currency. You'll just be spending your time, not your cash. Premium items will be available, however, and this is how Fatshark hopes to fund new DLC.

While Vermintide 2 features a few expansions, it's also given maps away for free and allows anyone to play the premium stuff by joining a game with someone who already owns it. Wahlund wants to be able to offer more DLC like that and will be watching how the store performs to see if it's possible.

"We're patient," Wahlund says. "We're not in a hurry to do anything. We want to make sure people have a good time playing the game for a long time."

The premium items won't require you to purchase bundles of currency, either. One of the most egregious microtransaction tricks is selling bundles in increments that encourage players to buy more than they need. If an axe costs 1,000 Bullshit Bucks, chances are the closest bundle will be 1,100 BBs. In Vermintide, it will be done through Steam using regular currency and you'll be able to purchase the item directly.

With Chinese publisher Tencent owning 29 percent of the company, the news of the store has made some players question if this was a change inspired by the company rather than Funcom. According to Wahlund, however, plans for the store predate Tencent's purchase of those shares. Originally it was going to launch not long after Tencent arrived on the scene, but Fatshark was worried about the perception among players and thus held off.

"This is something we wanted to do," he says. "Tencent is very passive. They don't tell us what to do or change business models; it's 100 percent up to us. We're the majority shareholders, so we control the company. They got one board seat out of five, so they don't have the mandate to tell us what to do."

Tencent does have a lot of experience with this kind of business model, however, so the publisher has been able to provide feedback. Wahlund emphasises, however, that it's all Fatshark's creation.

I wasn't really on-board before, but as someone who is sick of being a victim of RNG, I'm coming around to it, especially with the focus being on letting players buy cosmetics with in-game currency instead of real cash. Fatshark has been running a beta to get player feedback, and the store will be added to the live game later this week.