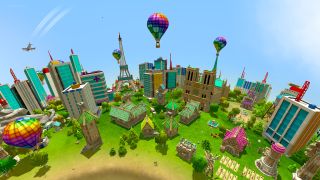 Australia is still contending with devastating wildfires that have been plaguing the country all summer, exacerbated by heatwaves and drought. To help support people affected by the fires, The Universim developer Crytivo is donating profits from its own store and Steam.

Climate change has made conditions especially ripe for the fires, which are now responsible for the deaths of more than 20 people and millions of animals. Beyond the destruction they cause, the smoke clogging the air—so thick you can barely see in front of you—is also a serious health risk.

There are lots of ways for you to help, including donating to the Red Cross and the NSW Rural Fire Service. Now, you can also buy some games. Crytivo is donating 100 percent of its net revenue from the Crytivo Store and 30 percent from Steam sales to Australian wildfire relief for the next two months. Crytivo's donations will go towards rebuilding homes, supporting firefighters and environmental cleanup.

"Our hearts go out to everyone who has suffered from this disaster and to the heroes working tirelessly to help," says CEO Alex Koshelkov. "We hope this will inspire others to take action and help in any way they can."

The Universim is an Early Access god sim where the environment exists to be exploited or to create disasters, so it seems fair that it's also raising money to alleviate those things over in the real world. Crytivo also sells games it publishes on its online store, as well as a few others like Beholder.