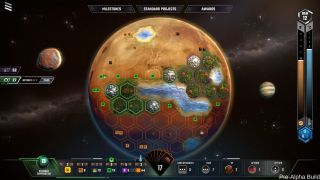 Terraforming Mars was one of my favorite board games of 2016. It’s a game of interesting scope with a lot of viable strategies—from ultra-focused economic engines to agile generalist and opportunist builds. It’s an experience I’d recommend to almost anyone interested in this type of complex economic strategy board game, or the concept. Its only real downsides are its lengthy setup and roughly two-hour playtime. I recently got a chance to spend some time with an unfinished build of the upcoming digital edition, and it really solves one of my problems with the game.

If you’re not familiar, let me give you the rundown. You and your opponents are megacorporations in the far future, all preparing for the daunting task of terraforming our celestial neighbor into a place fit for human habitation. You’ll heat up Mars, increase the amount of oxygen in its atmosphere, green its surface, erect arcologies, build orbital infrastructure, and fill oceans. Those who contribute to the project more will receive additional funding from the United Nations.

Each round of the game—called a generation—you buy and play cards that represent projects undertaken, like crashing comets into the planet surface, building farms in the noctis labyrinthus, or, uh, introducing hardy lichens to the surface. Cards let you spend and manipulate resources like Credits, Steel, Titanium, Plants, Energy, and Heat—and that’s where the real meat of the game is. These interlocking resources form an interesting web that it’s satisfying to manipulate and spend.

On the tabletop, the game’s setup and reset time are a big factor: a player can end the game with twenty or thirty cards sitting in front of them, along with a huge pile of resources, that all have to be reset and reshuffled to restart the game. Digital editions of complex games can be a huge boon, letting them get played for hundreds of hours more than they’d otherwise ever get played because of problems like scheduling and setup time. It seems like this will be a boon for Terraforming Mars, as I was able to knock out 1v1 matches in under an hour. Human decision, however, will slow the game down considerably—I don’t expect that multiplayer matches will be any faster than the tabletop game takes. It feels like you’ll really just cut out the setup time—and for me, for this game, that’s probably going to be enough.

A secondary benefit is that this game is way, way prettier than the tabletop version ever was. Suffering from a lack of cohesive visual design and lackluster art, Terraforming Mars was always carried by its superior gameplay rather than its looks. That’s quite different in this digital edition, with the planet rendered as a model that evolves and changes, rather than a drab board with some hex tiles. Animated cities sprout from the planet’s surface and asteroids crash into the surface. Greenery appears not just as you place it on the board, but as the atmosphere and infrastructure develop. Formerly drab installations from the early game change and evolve into the late game, developing rings of green—it’s one of those small touches that does so much to enhance the fantasy of a game.

Terraforming Mars’ digital edition is due to release this quarter.