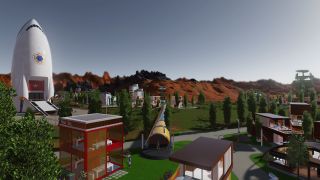 Surviving Mars: Green Planet gives you tools to transform the red, dusty rock into a verdant paradise full of cheerful humans and animals wandering around outside and breathing in the lovely air. I've used this opportunity to provide an important service for humanity: I am taking all the horrible geese from Earth and moving them to Mars.

Unfortunately, to bring animals (including llamas and penguins) to your paradise-in-progress, you'll need to pick the Project Laika content pack along with Green Planet. It feels a bit like double dipping, especially when it's inextricably linked to Green Planet's features, but at least it's under £5/$6.

It's a slow process, making Mars green, but terraforming comfortably inserts itself into the flow of the game. If you start with the new terraforming mission sponsor and commander, you'll get a leg up and be able to start seeding Mars straight away, but everyone can researching the appropriate tech from Sol 1.

Seeds brought from Earth or gathered from farms can eventually be deposited in new buildings that spread them across a large area, starting with lichen, building up to grass and eventually trees. None of this can happen without first prepping the hostile world, however. The lack of water, alien atmosphere and low temperature means death to plants.

Buildings and special projects, like harvesting ice asteroids, are required to make Mars the kind of place that can support life, but conveniently you don't actually need to wait for a dramatic change before you start planting seeds. They'll spread as Mars improves.

Since oxygen and water are incredibly precious, keeping up with the demands of a burgeoning ecosystem and any animals you might have brought along can be tricky. In the early-game, you'll want to get the basics going but still focus on just getting your colony sustainable. Even just one or two forestation plants and the new heating buildings, you'll see some big changes around your colony.

Further down the new tech path, you'll unlock the ability to create lakes and pump greenhouse gasses into the air. Just watch out for the acid rain. Once the environment has advanced to a suitable level, you'll then be able to set your colonists, geese and human, free. They'll be able to live outside instead of being stuck in domes all day.

I'm not quite at that point, unfortunately, because I didn't follow my own advice, overextended and lost about half of the colony. The geese were left unattended! I'm back on track now, however, and am looking forward to having something like the colony below.

Even if you don't pick up Green Planet, you'll get access to some terraforming tools, allowing you to do a spot of landscaping. Mars is a rocky place that forces you to build around it, but with the landscaping tools you can flatten terrain, create ramps and, if you end up missing the rocks, you can build some rock formations.

The free portion of the update also introduces three special projects, new buildings, more event chains and a reworked research UI. There's also a new kind of dome. Well, an old one with some enhancements. The self-sufficient dome is just a basic dome with with life support buildings already attached. It's very handy when starting out, and picking the International Mars Mission sponsor means you'll get to build one right after you've landed.

Both DLCs are out on Steam now.