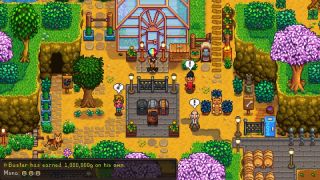 Stardew Valley creator Eric Barone isn't done tinkering with his farming sim, and he took to Twitter over the weekend to share what he's been up to, namely update 1.4. "It's a big one," Barone promised, and will include a new farm map, Four Corners, and separate bank accounts in multiplayer. No more going seed shopping only to realise your mate's blown it all on garden ornaments. We said we'd discuss purchases as a group!

Barone showed off a screenshot of Four Corners, which apparently only reveals a fraction of what's heading to Stardew Valley, first on PC and then eventually on consoles.

The new farm will split farmers up a little bit more than normal, but it's still cooperative. "There's one shared cave, shared community centre, mines etc," Barone said. So you won't be going it alone entirely, but you will be more independent than you would be on the older farms.

Existing multiplayer farms will still have shared accounts, but you can hit up the mayor and make the switch. That will automatically share all the cash evenly. New multiplayer farms can select the option at the beginning. Barone confirmed that the new map, while "perfect" for the new separate account option, will also be available in singleplayer.

Last week, Barone advertised a new administrator position, as he's looking to expand the Stardew Valley team. The job listing was criticised for having enough responsibilities to fill two jobs, if not more. Barone responded by saying that the position isn't to take over every responsible that was listed, just to help him manage them. That wasn't especially clear, and it still isn't. The high number of applicants means that Barone's not accepting more, but the listing is still up and continues to look pretty hefty for just one person.

There's no release date for 1.4 yet, but the tease suggests that it's not too far off. If you'd like to farm with your friends, check out our comprehensive Stardew Valley multiplayer guide.