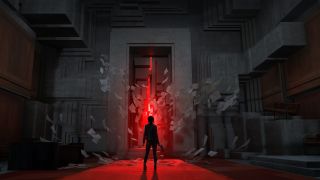 If you're into videogame art and want to know more about the visual aspect of game design, I highly recommend spending some time on ArtStation. This website acts as a showcase for the portfolios of all kinds of talented visual wizards, including concept artists, 3D artists, character artists, texture artists, and just about any role that ends with the word artist.

Control's setting, the shapeshifting Oldest House, is a supremely weird building where the mundane and the surreal share the same uneasy space. And you can see some of the concept art that led to its creation on ArtStation, including these beautiful, evocative paintings by Leonardo Calamati.

But concept art is just one step towards realising a setting as rich as this. The finished environments you see in the game are a result of the combined talents of several people, including environment artist Sebastian Schulz.

Lighting is another important, and often overlooked, part of designing a game world. Remedy's art drop includes examples of this from lead lighting artist Damian Stempniewski. Remedy has its own in-house engine, Northlight, which is capable of some really impressive, natural lighting effects—doubly so if you have a new graphics card with support for real-time ray tracing.

You can see some scenes lit by Stempniewski below. Because the Oldest House is a windowless skyscraper, there are no natural light sources. In place of windows, Remedy often uses large blocks of light in its environments. This is evident in the shot of the board room below, an impressive space that recalls the set designs of legendary production designer Ken Adam.

Control is just one of many games featured on ArtStation, and it's worth digging into the archives to see what you can find. If you're a fan of Alien: Isolation, another game with a strong, distinctive aesthetic, there's a lot of great stuff buried in there, including concept art by Calum Alexander Watt, character models by Jack Perry, and environment art by Pete Norris.

There's a mountain of concept art from the Assassin's Creed series on ArtStation too, from the earliest games to the most recent releases. Ubisoft's art department has produced some incredible work over the years, a lot of which is collected on the site in various forms. I particularly enjoy the work of senior art director Raphael Lacoste, whose gorgeous paintings help define the aesthetic of Ubisoft games such as Assassin's Creed Origins.

Lacoste created the images below early in Origins' development to establish the look and feel of the Egyptian setting, and it's remarkable how closely they resemble the finished product. Creating an Assassin's Creed map is a mammoth task, encompassing hundreds of different roles in a variety of disciplines, but it's fascinating that it all starts with paintings like these.

The Wolfenstein series from Bethesda and MachineGames is another example of a game that benefits from strong art direction. On ArtStation you'll find some detailed, expressive character models by Vidar Rapp, rich concept art by Dennis Chan and art director Axel Torvenius, and environment art by Fredrik Stertman. The brutal, hard-edged, industrial style of Wolfenstein's art is a big part of its appeal, which is evident in the concept images below.

And that's just the tiniest fraction of what's available on ArtStation. If you're a fan of a particular game, stick it in the search bar and you'll almost certainly find a post from someone on the art team. There is a lot of fan art on there, however, so you'll have to check the post description or artist bio to make sure you're looking at the genuine article. But even then, some of the fan art is really impressive too. It's a bottomless pit of amazing artwork.

It's easy to forget the armies of talented people involved in making the games we play, so ArtStation is an enjoyable reminder of the blood, sweat, and tears these artists pour into their games. It's nice to see other artists leaving encouraging comments as well. A lot of images are posted without context, but sometimes an artist will accompany their work with details about their process or inspiration, making it a valuable glimpse behind the scenes too.