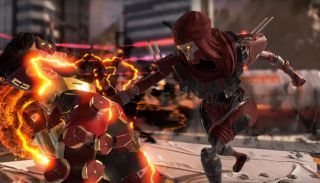 At the start of Apex Legends Season 4: Assimilation, the battle royale Titanfall spinoff is already a year old. Despite ups and downs in Year 1, each season has felt like a step forward for Respawn as it fine-tuned the game’s complicated arsenal of weapons and abilities. And Season 4 stands out as its smartest refinement to date. Year 1 carved out a meta that favors mobility. Now, it’s upending it with a legend that shuts down his competition: Revenant.

At least, that’s the idea behind his kit. Revenant reads as a murderous killbot, but his tactical ability is actually a silencing orb (tossed from a slingshot made of his own fingers) that disables enemy abilities for 10 seconds, not unlike Sombra's ult in Overwatch. For most legends, a 10-second timeout isn’t a harsh punishment. You can still run, aim, and shoot all the same while silenced. This Revenant ability seems particularly aimed at Pathfinder and Wraith, two legends whose movement abilities have more-or-less defined Apex’s high level meta. If his Silence hits its mark, Pathfinder can’t grapple in for an ambush and Wraith can’t void away from danger.

Trust no one, not even yourself.

His silence is a big deal in theory, but it’s too hard to use. The orb has a small radius and a long cooldown. It’s easy to miss when it counts and even easier to misread the right time to launch it. The orb also can’t shut down abilities or ultimates that are already in progress. It can’t cancel out a zipline in a clutch moment, destroy an existing Wraith portal, or end Bloodhound’s Beast of the Hunt speed boost. Its restrictive use makes Revenant’s entire premise largely inconsequential.

Revenant’s true value is in his ultimate ability, the Death Totem. The totem is a crystal figure placed on the ground that any player—friend or foe—can touch to temporarily cheat death. If you're killed, you zap back to the totem with a sliver of health and your inventory intact.

A second chance at a lost fight is powerful, but it’s also risky. Not only can the totem be destroyed with a few shots, but it can be sabotaged with Caustic’s gas traps or camped by a player eager to finish you off. It’s not a free extra life—it’s an insurance policy.

Ability denial is an interesting new wrinkle in the Apex meta, but Revenant’s impact isn’t large enough to pick him over the game’s current juggernauts. It’s hard to justify bringing such a niche role when teams max out at three. The simple truth of battle royale is that positioning is king. The surest path to success is sticking to cover with Wraith’s portals or Pathfinder's ziplines and hoping the circle is in your favor.

Abilities that open up more map traversal options will always be favored unless something more fundamental to Apex’s rules change. Still, fun offbeat abilities have plenty of value in a casual setting.

Season 4 made big weapon changes. Sniper rifles are now their own class of weapons with a separate ammo type. Previously, powerful single-shot rifles like the Longbow, Triple Take, and Charge Rifle benefitted from eating less ammo than full-auto weapons. Now that these rifles need separate ammo type that only stacks 20 shots per backpack slot, holding onto a sniper is a harder decision.

That’s especially true for the Sentinel, Apex’s first bolt action sniper rifle. Like all great bolt actions of gaming, the Sentinel hits like a truck. Its brutal fire rate makes accuracy all the more important, but the crack of a headshot has never been more satisfying in Apex. The Sentinel has the unique ability to supercharge its bullets by absorbing a Shield Battery. While supercharged, every shot deals a guaranteed 100 damage to shields.

It's a creative design—I can't think of another gun that spends a defensive resource to create offense. A charged Sentinel shot can crack three shields within seconds and apply instant pressure. If you’re like me and have unreliable accuracy at long range, it’s a risky pick.

On the balancing front, the G7 Scout is now considered an assault rifle and can’t equip long-range scopes. A Scout with the Double Tap hop up is still one of the deadliest weapons in the game, so I like the decision to decrease its long-range potential and emphasize pinpoint accuracy at mid-range. The L-STAR has been taken out of supply drops and can now be found on the map as a normal energy weapon. Taking its place in supply drops is the Devotion LMG, which boasted such strong stats that Respawn has decided to make it a rare find. Power-wise, this makes a lot of sense. The L-STAR is an underwhelming oddity with slow-traveling energy bursts while the Devotion is a murder machine when fully kitted with attachments.

Apex is staying on World’s Edge for at least one more season, but things have been looking a bit different after Revenant’s arrival. The most striking update is the gigantic Planet Harvester that now populates the middle of the map. The skyscraper-sized drill is constantly pumping out a sky beam that, I can confirm, kills your entire ass if you dare fly through it. It’s also a spicy drop for high tier loot with branching corridors that guarantee conflict at their center.

The effects of the harvester are felt elsewhere on the map, particularly in Capitol City. A crack in the earth has split the city in two (Fragment East and Fragment West). The gap is too big to clear without a zipline, but you can hover across the updraft created by the heat at the cost of 40 damage. Respawn broke up the city because it’s the most popular place for fights on the map. Now it feels like two zones with a built-in buffer zone. You’re generally not going to land in Fragment East and get shotgun rushed by an aggressive team in Fragment West.

Assimilation’s map update, like the rest of Season 4, feels like targeted refinement. Parts of World’s Edge felt empty, so now there’s a planet harvester. Capitol City was an unrelenting bloodbath, so now it’s a bloodbath with a big hole. The updates aren’t game-changing, but they don’t have to be. I’m happy enough to have new places to go and small changes that make old spots feel new. Though, it’s still a shame that only one map is active at a time in Apex. If Respawn continues its pattern, Season 5 will have a new map. I hate to think about being locked out of World’s Edge just as it was growing on me.