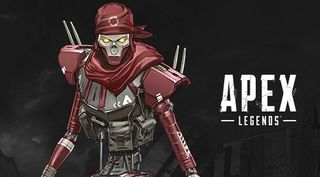 Apex Legends season 4 has launched, adding mysterious new legend, Revenant, into the fray. Previously referred to as 'Blackout', he has been a frequent topic of discussion for months. Now we can finally see how he performs in the Apex games.

Stepping up as the face of Assimilation, Revenant is a complicated individual with a laserlike fixation on revenge, but what has moulded him into such a hateful being? From his troubled past, abilities, and release date—here's everything we know about Revenant.

Assimilation marks the fourth season of Apex Legends, coinciding with its first anniversary. Revenant is now available to purchase for 12,000 Legend Tokens or 750 Apex Coins. The new legend has launched alongside a new battle pass, sniper rifle, and changes to Apex Legend's ranked matches.

In the few glances we've had of him, Revenant has established himself as a formidable machine. He's a robot that can defy death, but he used to be human. The Assimilation launch trailer gives us a glimpse of his mortal self, alongside the nightmarish entity that he has become. In the video we see Revenant (portrayed in his human hitman form) receive his next target: Marcos Andrade. Throughout the video we see glimpses of him as a human reflection alongside his, now, cyborg appearance. After disrupting a celebratory dinner, Revenant eliminates both Marcos and his wife, leaving his young daughter as the only survivor. Speculation suggests that this child may grow up to be Rosie, also known as 'Loba', who has been listed in previous leaks, reported by Dexerto last February.

His past looks fragmented, but we have been provided with an explanation as to why Revenant's so grumpy. According to Respawn, "he was the greatest hitman the Mercenary Syndicate ever had. But when his programming eventually failed, he saw what Hammond Robotics had turned him into: a walking nightmare of steel and vestigial flesh." Hammond Robotics—the same corporation that creates the Titans in Titanfall—has set up a Planet Harvester in the middle of the World's Edge map. Their presence is very apparent in season 4, tying in with Revenant's release. The new legend has his sights set on killing everyone affiliated with Hammond Robotics, which also explains his coldblooded attack on Forge.

Assimilation isn't our first interaction with Revenant. Back in October he hosted the Shadowfall game mode during the Fight or Fright collection event. Shadowfall put an eerie spin on the Apex Games, dropping players into Kings Canyon at night. Over the course of the game, eliminated players were resurrected as 'Shadows'—a form we see now see reused in Revenant's Death Totem ultimate.