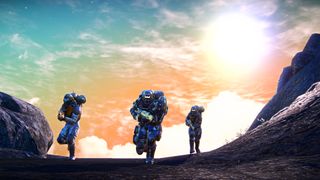 Planetside Arena went into Early Access on Steam in September, but seemed to run into trouble less than a month later when developer Daybreak Games laid off an unspecified number of employees, including members of the Planetside Arena team. Two months on, the studio has announced that that the game is not working out, and so servers will be closed in January.

"While our team set out with an ambitious vision for a game that combined the massive-scale combat and camaraderie of PlanetSide through a diverse collection of new game modes, it has become clear after several months in Early Access that our population levels make it impossible to sustain the gameplay experience we envisioned," executive producer Andy Sites explained in a "sunset letter."

"As a result, PlanetSide Arena will formally shut down servers on January 10th, 2020 at 5:00 pm PST. We are actively working with Steam to ensure that all players who made purchases during Early Access will automatically receive a full refund to their Steam Wallet after servers shut down in January."

It's always unfortunate to see a game close, but the numbers on Steam Charts tell the tale. Planetside Arena had an average concurrent player count in September, the month it debuted, of 474, which sunk to 54 in October and 17 in November. Over the past 30 days, it's been a little short of 11; as of right now, three people are in the game.

That reflects a state of the genre Chris discussed in his recent look at the impact of battle royale over the past decade and beyond. The field is littered with games that attempted to capitalize on the popularity of the genre but simply could not overcome the dominance of Fortnite, PUBG, and to a lesser extent, Apex Legends. And it's not just smaller, relatively unknown games that struggle to break their grip: Battle royales in the mega-popular Call of Duty and Battlefield franchises have also failed to catch on.

Planetside Arena will be playable until the servers go offline in January, but all DLC and virtual currency purchase options have been disabled; any virtual currency in your inventory can still be spent as usual, however. Players with questions or concerns can hit up help.daybreakgames.com to have them addressed.

"Thank you again for your loyalty and support during Beta and Early Access. Your feedback was invaluable, and your enduring passion for PlanetSide remains the bedrock our community is built upon," Sites wrote. "As painful as it is to close this chapter so quickly, we remain deeply committed to this franchise, and look forward to continuing this journey through the PlanetSide Universe with all of you."

In October, Daybreak described Planetside Arena as a "stepping stone" to Planetside 3, which is expected to be bigger and more expansive than Planetside 2, although no hard details about the game have been revealed as of yet. The studio did not comment on how the shutdown could impact the development of Planetside 3.