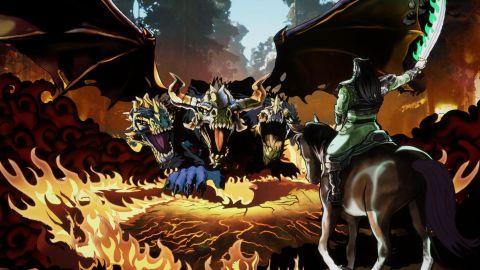 Unique folkloric inspiration and interesting tactical considerations are let down by a slow second half.

Some of the Hungarian words Operencia has taught me to pronounce include táltos (a kind of shaman) and Napkirály (the king of the sun). I also learned that Hungarian children are told spooky bogeyman stories about an owl with a copper penis. It's been an education.

Zen Studios is a Budapest-based team better known for making pinball games than fantasy RPGs. Their first foray into the genre draws from Hungarian mythology, giving it a mix of oddity and familiarity—fairytale stuff like magic beanstalks and cursed castles alongside capering busós who wear demonic masks with droopy moustaches.

Operencia is a dungeon-crawler, first-person and played on a grid like the old Wizardry games. It's the kind of thing people on the internet apparently call "blobbers" because you control a party that moves as a single inseparable unit, one big blob of archers, thieves, and wizards, only here one of those wizards is a táltos and the other is a fallen star in human form.

Combat in Operencia is turn-based, with enemies lined up in three different range bands. My hunter opens with a headshot targeting someone in the back row before my thief drops asphyxiating poison on the whole bunch, the magic stonemason summons a protector, and the knight chooses a taunt that also covers him in damaging thorns. Like everything in Operencia it's a mix of the surprising and the expected—sometimes I'm fighting beasts out of central European folklore, sometimes it's skeletons again.

Fights occasionally drag, especially against "spawners" who have a random chance to come back from the dead. When the same two guys resurrect three times in one fight, or spiders eat their wounded allies to gain a hundred hit points and double in size, it becomes an accountancy test instead of a thrilling battle. You spent all those energy points on using your cool abilities straight away? Well, the fight's going to go for twice as long as you expected, hope you budgeted for this eventuality! Now sign these forms in triplicate.

You know what's fun, though? Brewing potions by solving logic puzzles. I am 100 percent serious about this. If you enjoyed solving the Jindosh Lock in Dishonored 2 or any part of Return of the Obra-Dinn you will like following recipes in Operencia. "The ingredient from the field cannot be a crop," one might say, "while the one from the mountain cannot be poisonous." You arrange icons representing the different qualities of various fungi and roots, making deductions to fill the gaps, then suddenly you've got a brew that removes damage-over-time effects.

The dungeon puzzles are more traditional. Memorizing the timing of spike traps for instance, or measuring out a precise amount of wine to fill a keg using two bottles of different sizes. They often feel more like an element of pacing than of challenge, giving you something to mull over between the other pillars of Operencia, which are fights and the campfires where you rest, regaining your hit points at the cost of a piece of firewood while your companions trade stories.

Those companions are a likeable bunch who banter and reveal secrets in a way players who miss older BioWare games will enjoy. Unfortunately, campfires are the only place you can switch party members in and out, and you can only access equipped items held by current party members in a different set of menus. It makes moving gear between them a hassle.

Issues like this, and the occasional bug (like one that dropped me through the bottom of a forest), were minor complaints. For the first 10 hours I thoroughly enjoyed Operencia. Then I got to the Copper Forest, where I had to trek back and forth on a search for keys that involved pixel-hunting, much more opaque puzzles, and encountering the same enemies over and over.

Even the fights against skeletons had some variety—sometimes they have bows or magic—but here I fought endless groups of identical Copper Soldiers with a bunch of resistances and immunities, the ability to drain energy making me rely on basic attacks rather than fancy ones, and hundreds of hit points. Even their attacks were boring, and eventually I turned down the volume so I didn't have to hear the whine of their buzzsaw blades five times in a row every turn.

Later areas weren't quite so bad, but they never got back the magic of Operencia's opening. The puzzles were more about scouring the environment for hidden clues or tiny objects, and though some interesting new enemies appeared the sluggish feeling never quite went away. It was only rarely as inventive or delightfully strange as it had been at the beginning, once upon a time.

Operencia ended up being a game I wish I liked more. Its first half was enchanting and clever, but the second half was a slog and the main thing I gained from it was some trivia about a giant Hungarian owl with a weird copper wang who scares children.

Unique folkloric inspiration and interesting tactical considerations are let down by a slow second half.