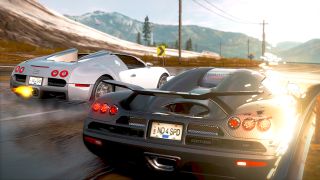 After seven years at Swedish studio Ghost Games, the Need for Speed series is being passed back to Criterion, its previous developer. Ghost Games, meanwhile, is being rebranded as EA Gothenburg, an engineering support studio that will assist on other games.

Ghost Games has been looking after the series since 2013's Need for Speed: Rivals, which it developed with help from Criterion. It was a solid though not remarkable entry, followed a remake of the original that would have probably been good if it wasn't for the performance issues and problems stemming from being always online.

The studio's latest game is the best Need for Speed in years, according to Rick Lane's Need for Speed: Heat review, but it's felt a bit like the series has been coasting. EA struggled to attract the right people to Gothenburg, GamesIndustry.biz reports, while Criterion is based in Guildford, home to a long list of studios, including Hello Games, Supermassive and Media Molecule.

While some will stay on at the rebranded studio, other members of the team will be transferred to Criterion and other studios within EA. There are still 30 staff at EA Gothenburg who have yet to be placed elsewhere.

Criterion developed the third game in the Hot Pursuit series and a reboot of Most Wanted, but it's best known as the studio behind the Burnout series, which its Need for Speed entries also emulated. Despite its racing legacy, it's been stuck working on Battlefield and Star Wars Battlefront since it assisted Ghost Games with Rivals.

"With a strong history and passion for racing games and vision for what we can create, the Criterion team is going to take Need for Speed into the next-generation," said EA.

Burnout Paradise is pretty much my perfect racing game, so I'm keen to see if Criterion can inject some more life into Need for Speed. In the meantime, Forza Horizon 4 remains an excellent substitute. If you're in the market for one, check out our list of the best racing games on PC.