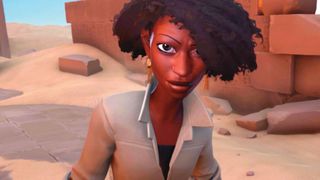 Campo Santo—the studio behind the contemplative forest experience Firewatch—is swapping tinder-dry trees and Wyoming fire lookout towers for ancient Egyptian tombs and early cinematography in its next game, In the Valley of Gods. Its announcement trailer offered a glimpse of a first-person adventure set deep in the Egyptian desert of the ’20s. You and a partner scramble through stunning ruined spaces before setting up a shot for your beautifully animated film camera.

The duo, as studio cofounders Sean Vanaman and Jake Rodkin tell me, are Rashida and Zora—filmmakers whose careers have hit the skids. The women are using their last chance at resources to try to make a hit documentary.

But a documentary must have a subject, and thus Rashida and Zora have decided to investigate the rumour that an obscure archaeologist has discovered the tomb of Nefertiti. “They’re determined to be the ones who make the movie about its discovery,” explains Rodkin.

“Yeah, they’re going to be there with cameras rolling when he discovers this tomb,” says Vanaman. “In the world which we occupy, which is the world the characters occupy, [Nefertiti’s burial place] is one of the last great unfound things. There’s a lot of rumour and archaeological speculation that perhaps it was found but not really identified because it didn’t have the scope and grandeur one would associate with someone as prolific as Nefertiti, or it’s still out there, or, or, or, or…”

He adds, “In terms of the sociocultural, historical, archaeological aspects of the game, we’re trying to keep that stuff founded in reality. Our art director [Claire Hummel] is incredibly well read and well researched about Egypt, not just in ancient times but in the time in which the game is set.”

In fact, it was an image called 1923 in Hummel’s portfolio which inspired the game in the first place. “We were at a time when we’d cancelled a game and… ideas aren’t super precious,” says Vanaman. “Somebody who is as talented as Claire is, you could open up her portfolio and, aside from her Animorphs fan art, you could make a game about anything.” (Rodkin disputes the exclusion of the Animorphs fanart, by the way.)

1923 struck a particular chord. Vanaman explains that he was looking for something that tapped into the studio’s ambitions as well as providing a point of difference—he knew, for example, that lead artist Jane Ng did not want to make trees anymore. “We knew we didn’t want to go back into the woods. We didn’t know if we wanted to do something interior or exterior—maybe a blend of those two.”

Explaining why he gravitated towards 1923, Vanaman points out the level of interest and care when it comes to elements like the hieroglyphics, the confidence expressed in the image, the colours and textures which sidestepped papyrus effects and Egyptian blue accents in favour of pinks and greens on an Art Deco-esque poster.

“It was a piece you could look at and wonder what other stories could be told in Claire Hummel’s version of Egypt,” says Rodkin. “It was about that era and about Egyptomania but it was clearly from someone who had an understanding of and respect for the ancient Egyptian culture as well.”

The game that is resulting from this initial artwork is at the liminal stage between preproduction and production. There are tools in place and the trailer offers a statement of intent, a collection of art assets, and it can act as a point of reference for the team, but the game itself is still in separate parts at the moment.

“We don’t have that piece where you go, ‘Oh man, between character performance and dialogue and music and lighting and flow and the way this level loads in…’” Vanaman says. “How do all the disciplines come together to produce the feeling that you see in the trailer? That’s the stuff we’re working on now and then we’ll go back and build the game out with a lot of mechanics.”

The idea is that you’ll be walking around these spaces in the game, exploring them and talking to the other character, Zora. In doing so you make choices and you build that relationship. Where Firewatch feeds you snippets of another character—a stranger—via radio conversation, in In the Valley of Gods Rashida already has a backstory with Zora and you establish that as you play.

The camera is particularly interesting to me. In Firewatch you could pick up a disposable film camera and take photos in-game. Those photos would show up at the end while the credits rolled, as well as being available to order as a physical souvenir of your time in the game, but they weren’t an integral part of the tale. The documentary element of In the Valley of Gods means recorded imagery will take on far greater significance, but the exact format is a work in progress.

“We have a lot of ideas around that, from as bonkers as when you look through the camera the world looks different, all the way to you’re editing your own movie,” explains Vanaman. “We don’t know where the sweet spot is for any of that stuff [yet].” As Rodkin puts it, “It seems like thematically that’s going to be in the game, but how it’s expressed through mechanics and to what degree that’s expressed in the mechanics, we’re still figuring out.”

Rodkin draws an unexpected parallel while discussing the moment at the end of the trailer when Rashida is loading the camera up with a film cassette. “I had fun thinking about, ‘What is an old silent movie camera?’ And it actually feels to me like the really prolonged and super satisfying animation that plays when you are the Demoman in Team Fortress 2 and you reload your grenade launcher. That’s all I was thinking about when talking with James about how to animate that scene!”

The camera ideas have been put to one side at the moment. In the Valley of Gods aims to have Rashida’s filmmaking partner, Zora, meaningfully present in the space. Building that aspect of the game is what the team are focused on right now. “We wanted to do something that had some pretty high-paced madcap character interaction so... Charade is a great movie,” says Vanaman by way of example. “It's characters going from one thing to another and moving through the space quipping at each other.”

The main challenge right now is making it feel like the characters are aware of each other, down to movements and individual dialogue. “We’re trying to figure out where’s the most bang for the buck in terms of character performance and dynamic behaviour and scripted behaviour and behaviour tree scripting versus straight-up trigger-based scripting,” says Vanaman.

Rodkin talks in terms of old movie special effects documentaries where you see individual techniques being mixed and matched to find a solution to a particular challenge. “You keep failing with all these things until you get the moment of suspension of disbelief and go, ‘Okay, I believed for a few minutes right there that that was an actual person I was in a room with.’”

With the setting of the game there are a number of layers to consider. Firstly, there is the real ancient Egyptian civilisation of various periods which we know through relics and our own interpretations. Secondly, there is the game’s own ’20s setting which taps into Egyptomania and the fetishisation and trends accompanying that. Thirdly, there’s the contemporary world of Campo Santo and the playerbase where very different conversations about cultural destruction, repatriation and appropriation are taking place. So where is Campo Santo pitching its game tonally?

“A lot of the way we work as a group and a lot of the way I’ve always worked as a writer is, we have modern, pretty lefty feelings about shit,” says Vanaman. “But I don’t think we have declarative opinions about the way things should be. This game is not a political statement about representation or a political statement about appropriation of the past or whatever.” He adds, “The act of making the game for us helps solidify or challenge feelings we have held before we had to make the game.”

As part of the answer to this question there’s further insight into Zora and Rashida’s relationship: “Zora and Rashida got famous seven years before they make the game, making a movie we would now go watch in film school and go that’s kind of fucked up.”

‘Fucked up’ in this instance means how we would now view elements of protodocumentaries of that era, like Nanook of the North from Robert Flaherty. Flaherty is one point of reference for the team but others range from multiple visits to the British Museum in London to reading novels by Naguib Mahfouz, like Palace Walk.

There’s even the story of programmer Aubrey Hesselgren’s great-granduncle, George Herbert, fifth earl of Carnarvon, who likely died from an infected mosquito bite. Popular culture prefers to attribute his death to the curse of the pharaohs, thanks to Herbert’s backing of and involvement in Howard Carter’s famous excavation of Tutankhamun’s tomb, which began in 1922.

Deep dives into particular research rabbit holes are also common for the team and led Vanaman to observe, “We were both thrilled and annoyed about the prevalence of how many cat mummies there were in Assassin’s Creed Origins because we went on a six-month cat mummy bender.”

Rodkin notes that, because of the fascination with ancient Egypt in the early 20th century, “Every ancient Egyptian ruin is chronicled to an obsessive degree. Both the architecture and the paintings, but also you can find a lot of hobbyists in the 1.0 web era did 3D virtual walkthroughs of tombs and you can find complete maps deep into all of these ancient ruins.

“It’s been interesting because Egypt has been—Raiding tombs, believe it or not, is a thing that has been done quite a lot in videogames. It’s been really fun to work with Claire and Jane and Sean and Duncan too—especially Claire—to look at these real Egyptian ruins and try to get into the heads of the people who built those spaces and look at them as aesthetic objects to explore and think about walking through them, not with an eye to where you could put a sweet trap, but more what would it be like to descend into these almost like spelunking.

“I found that really a fun mental space to be in, to look at this imagery I have seen in a lot of videogames and a lot of movies and thinking about wandering through it really slowly with another person—a character that you know in the fiction—and a camera.”

Rodkin adds, “In Firewatch we looked at a lot of national parks and we’ve been to a lot of these places in the American West. But it’s not the same as looking at tiny paintings on a wall or carvings that you can run your thumb across and thinking about what that experience is like in a game and sharing that experience with another character. That’s been really fun.”