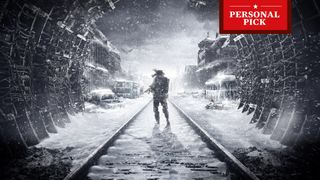 I don't think we'll ever get a proper sequel to Stalker, the sandbox FPS set in a supernatural version of the Chernobyl disaster zone. Despite a few different games each claiming to be the true successor—even the original developers are working on a numbered sequel—I'm very skeptical that any will see the light of day. So imagine my surprise when I booted up Metro Exodus for the first time and, after a lengthy introduction, found the Stalker I had been yearning for.

Unlike the previous two Metro games, Metro Exodus ditches the claustrophobic tunnels of the Moscow subway system for the wide open expanses of rural Russia. Set in the aftermath of Metro: Last Light, Artyom discovers that humanity has survived the nuclear apocalypse and sets out with a group of soldiers to find more survivors. Cue what is one of my favorite singleplayer campaigns of the last few years—an odyssey through wetlands, deserts, and lush forests to find whatever remains of civilization.

Like most Stalker games, Metro Exodus is broken up into three smaller open world zones that you can explore (mostly) at your leisure. But where Stalkers zones all share a common theme of being set around Chernobyl, Exodus' open world areas are distinctly different and each memorable in their own way.

To be clear, Metro Exodus isn't really a sandbox game in the way that Stalker is. There's a clearly defined story that pulls you from mission to mission with only a few opportunities for detours to explore along the way. I actually like it that way. Instead of trying to create a big, sprawling, simulated ecosystem, Exodus elegantly distills what makes Stalker tense and intriguing into something much more palatable.

Where Metro and Stalker find a middle ground, however, is in their somber atmosphere and emphasis on humanity. Stalker achieved the latter largely thanks to really impressive AI, but Metro takes a more classic approach by loading the campaign full of cutscenes that slowly peel back the layers of its core characters. Though some might find it a needless distraction, I really enjoyed the segments on the train where I could wander around and talk to my crew. It was good to know exactly who and what I was fighting for—something I struggle with in Stalker. You can even retrieve an acoustic guitar and give it to one of your mates to play, which is the most Stalker thing ever.

But these differences feel a lot smaller when I'm deep underground in some abandoned mechanical shaft shooting mutants. Metro's trademark flashlight—that constantly requires you to charge via a hand crank—is just as effective and fun as it is in the first two games, but I also love the added layer of guns decaying and eventually misfiring if they get too dirty. Crafting systems, especially crafting systems in FPSes, often make me cringe. But like everything else in Metro Exodus, crafting is lean and efficient and the slow decay of weapons is just enough to cause anxiety but rarely downright frustrating.

In a 2019 absolutely stuffed with great games, I fear Metro Exodus will end up being a footnote. But I really don't think it should be. It's pretty rare that I finish a game these days (there's always something new!), but Metro Exodus was one that I really soaked in and enjoyed. There's a near perfect mix of exploration, shooting, and story, and the 'road trip' setup of the campaign does a surprisingly good job of making me feel like I'm on a grand adventure. But, most of all, Metro Exodus rekindled fond memories of one of my most beloved shooters.